click here for a larger view of the panorama
Here are both sets of June's breakthrough 'Woodland Acoustic Orchestra' performance! Expecting at least a couple of the musicians to arrive slightly after 8pm, I had prepared another short acoustic set to use the gap to test some arrangements. But by 8pm, the core group for the evening -- TQ Berg (Steel-String), Woody Frank (Steel-String), Dennis Jolin (Ukelele, Table, and Bike Wheel), Ian McKagen (Steel String), and Me Woods (Bass-Box and Percussion) -- were completely set up and ready to roll! (At this point, we didn't realize that the Chai House clock was over 20 minutes behind due to a failing battery, but it sure *felt* like we were off to an early start.) 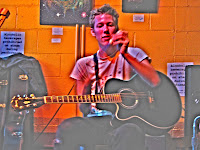 And a strong start it was! With a solid critical mass of 5 players right from the top, we were finally able to explore the new signaling approach that I'd been planning to try as soon as we had enough musicians to pull it off.  This new "breakthrough" system is actually pretty simple: A white-board is set up in front of the band -- facing the stage. Once a groove is established the first player works their way out of the jam and writes a signal (chord-change, time-change, stylistic/structural concept, etc...) on the board. While the composer-of-the-moment is getting their instrument back on and re-entering the groove, everyone is quickly reading and integrating the signal...preparing a musical response to it. After the signaler has insinuated their way back into the groove, they signal the transition. Everyone changes what they are playing in accordance with the signal. 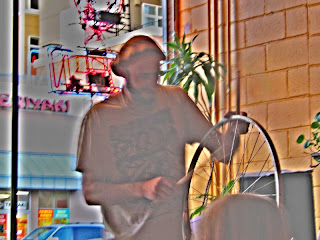 Any time after this point, the next person in the circle puts down their instrument and writes a new signal on the board -- during which time, the rest of the group can ignore them and just concentrate on developing whatever movement has come from the previous signal. And this group of players definitely rocked it! ...deftly manipulating the abstract system to maximum effect, while keeping enough moment-to-moment focus for expressive instrumental interpretation and some interesting vocal-additions.
I really love the effect of rotating through the line-up with each player contributing creative open-ended compositional direction and the group spontaneously responding! And the written format naturally breaks up the mix (as each player in turn has to temporarily stop to write) and allows the band to communicate without "tipping their hand" to the crowd. 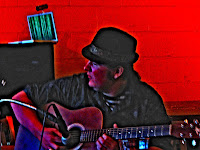 The audience, not knowing exactly what the syntax of the signal was, picks up only on whatever semantic value it added to the collective groove, unburdened of their own interpretations of how the group "should have interpreted it", yet simultaneously just a wee bit curious as to what words might've provoked the latest large-scale shift in the sound. From informal polling of family there that night, it seems to produce a pleasing mystery.

For the second set, frequent drop-in collaborator William Precht was available to jump on the piano and so we all tuned down the 3/8 of a step to match the average of the Chai House piano's scatter-plot tuning scheme. 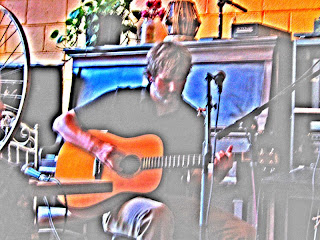 It was a welcome addition, providing a new dimension of rich sustained warmth for the remainder of the evening. At about 10:12, after a third extension of "Super Barista" (still failing to get a reaction out of Erin and Rita :), I glanced up at the clock and was surprised to see that we had already gone so far over time! This, of course, was before Erin told me that the clock's battery had needed changing, and I suddenly realized that our seemingly magic ability to start on time -- and then play such an amazing second set that it appeared to catapult us through some sort of experiential worm-hole -- was actually just the result of the two of them deciding that they should probably wind it ahead to "Ballard Standard Mean" time, in case we looked up for reference.
Anyway, that's just about it for this one from me. Special thanks to Tina for the photos! And as always, I encourage you to add your own show-notes here in the comments. 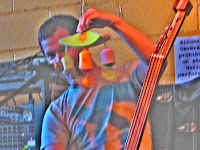 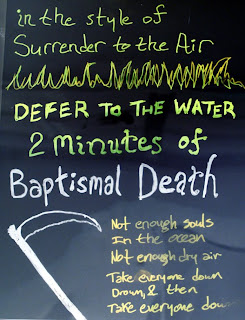 Set 1 started off with the usual warmup jamming and show-introduction, followed by a less-usual kick-off sheet from within the band (thanks TQ!) to get us going. The "song" that resulted was one of my favorites of the night. IMO, this is another fine example of the increased synergy within the group resulting from retaining most of the same Jugglers from show to show. And this particular idea seems like something we should keep doing (helps tie that first 20-minute free-jam while waiting for Challenger input into the rest of the show)!
As the Challenger input started coming in, the music built on plenty of continuity, creative counterpoint, and ready energy. Several of the pieces spontaneously developed distinct repeated movements (verses and choruses?...sortof). A rich sonic palette combined with some new and effective leadership on the part of the other Jugglers really made this a breakthrough JCR show in my mind. Michael brought out a sheet as a screen for the overhead projector, and TQ even launched a whole movement on lead-vocals, which makes me think I should really set up some extra mics and try to lure the rest of the band to step up to the mic from time to time. Thanks to the band for continuing to jump right into the mess each month! 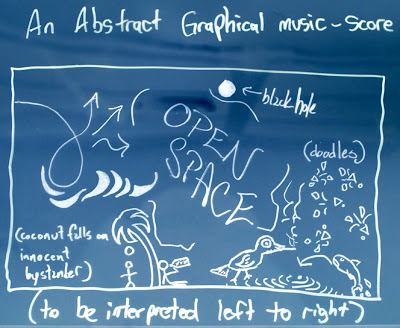 Speaking of energy, somewhere in the second set, I began to realize that my ears and the small vocal PA couldn't quite keep up with the swelling sonic mass. At the time I couldn't clearly determine or articulate the problem (you'll hear me repeatedly calling for general volume reduction towards the end of set 2), but in retrospect it's clear that the two electric guitars, while perfectly balanced with each other, ended up well above the remaining instruments and were most likely the searing stereophonic source of my ringing ears. (Given the often laser-like throw of a 12-inch guitar cabinet -- stealthily spitting fire well beneath the altitude of the average player's ears whilst flash-cooking the corneas of the guy who's only 7 feet further from the amp -- I suspect neither of them had any idea at the time.) Even still, with a bit more shouting than is maybe ideal, I think most of the concepts came across at some level and a good time was had by all!

That's it for me for this one for now, but as always, please jump in with your own observations, favorite morsels, costume-suggestions, etc... here in the comments section.
Posted by F R E E L A B at 9:14 PM 4 comments:

Set 1 37 megs
Intermission (Bonus) 3 megs
Set 2 (Truncated) 23 megs
This entry's recordings are from May 27th's superb WAO show! (The Woodland Acoustic Orchestra presents: "Unilateral Carp Tarp") Like many of the acoustic shows, for the first half of the week, it looked like we might have a fairly huge orchestra. 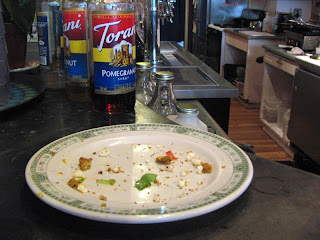 But like many of the acoustic shows -- even after I had eaten my entire plate of food for the first time ever and played a short 4-song solo set to stretch things out a bit -- we ended up starting the first set with a scant trio of musicians. ...thankfully, in this case, the very capable Dennis Jolin (Ukelele and Percussion) and Aaron Stepp (Fretless Bass) joined me (Six-String, Percussion, and Voice).

I had planned for a more formal signal-driven evening (using two white boards facing the band as a way for the musicians to log simple concepts where everyone could see them before signaling the change). But with a trio's ability to turn-on-a-dime, coupled with the expected drop-back to 2/3rds power every time somebody would have to stop playing to write something on the board...well, we didn't end up using the boards. 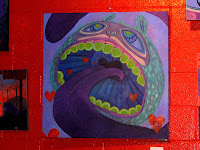 Nevertheless, I thought this first set was pretty fantastic! Dennis' sweet mid-rangey riffs looped perfectly across my warm/sparkly acoustic-jazz and Aaron's brilliantly syncopated bubbling bass-pointalism. Momentum was unbroken as the soundscape morphed from one relaxed contrapuntal mood to the next.
For the second set, we were joined by William Precht on percussion and electric kalimba. We also had a guy named Jo(h?)n playing some extra percussion from the couch. He must've been operating under the "first, do no harm" principle, because his additions were so sparse and/or tasteful that I didn't even notice him on my first pass through the recording. (I'll have to listen more carefully and see if I can pick him out next time.) William is always a super strong contributor and this set immediately opened up into a much broader space with -- for me -- cosmic overtones. Much like the first set, each movement segued beautifully to the next. Everyone really seemed to be having a good time. Sadly, though I had thoughtfully prepared the recorder for battery-only operation following the demise of my power-adapter, I had neglected to delete the tracks from the previous show and so we ran out of memory about 10 or 15 minutes before the end of the set. Stupid, stupid show-host/documentarian! Bummer to lose any of such a great set, but I guess at least the recorder -- unlike previous recorders I've worked with -- didn't trash the whole file when it ran out of room. :) And the remaining 20 minutes are well worth checking out!

I'm also including some of the setup for Set 2 here as a bonus intermission track. I liked the way the various noodly instrumental textures collage against the last of the Chai House break-music.

Well, that's it for this one for now. As always, I look forward to reading  thoughts about the show here in the comments.
Posted by F R E E L A B at 8:50 PM 3 comments: