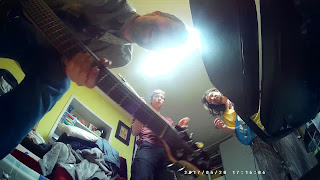 Here's most of a warmup jam from the top of last Thursday's rehearsal of what I've been calling the "Neon Grey" project (5-Track, Woody, Adrian, and Me).  The "?" in the post-title up there hints that we may be getting close to settling on a real name for this project. 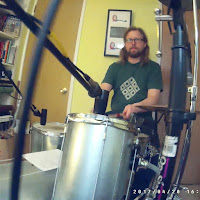 A lot was going on this night!  Not only was it April 20th (my birthday, among other things), but we were set up to multitrack for a demo/EP, *and* I was playing around with a silly moving-go-pro film-experiment.  The film experiment crashed and burned, adding plenty of distraction to at least the first 3rd of this warmup, but the vibe was very nice anyway, and I even pulled some stills out of the resulting video to add to the post here.
Posted by F R E E L A B at 9:28 PM No comments: