Set 1 46.8 megs
Set 2 45.3 megs
Here's another high-energy Juggler's Challenge Revival (episode #14) with Zane and Anders (formerly of the Consul)...this time with the added pleasure of their new -- and fantastic!! -- drummer, David Testa (in his first NBP appearance). I can't say enough about the bad-ass-itude of this lineup, especially along the axes of intricacy, syncopation, mood, and balls-to-the-wall energy! 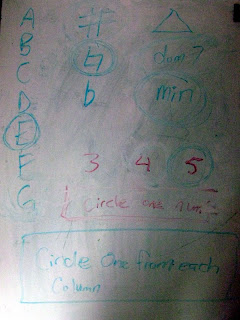 It's always a bit of a challenge at the Chai House keeping the vocals up to the energy of the instruments with these guys, but I think we did okay this time, with one PA-speaker near us as sort of a monitor and another over closer to the bar and aimed right out into the middle of the house (if you've been following my comments from previous postings, you'll know that I view 'ease-of-lyrical-comprehension' to be an essential element of a good Juggler's Challenge show...otherwise, it's all just distracting from the jams, right?).
Juggler's Challenge Process Notes: The new thing that I wanted to try this time was to have the audience call out the key-changes, using a simple three-column multiple-choice interface. I think this is a decent idea, but the interface seemed not to encourage further changes once a key had been selected and so -- after a few heavily-solicited changes -- it mostly languished on the coffee-table, unnoticed by Juggler and Challenger alike. Rather than using up an entire white-board, I think the next step for this sort of thing would be a three-dial system, with the hope that big dials will really lure people to touch and re-set them. 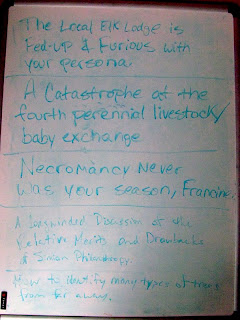 As with episode 13, I simply gave out the other white-board with a vague request for pictures and/or words. Aaron Stepp (basist for the previous and upcoming Acoustic Orchestra shows), stepped right up and filled the board from top to bottom with no less than 6 brilliantly-quirky song-ideas, continuously re-filling at the top with the same high-quality challengement (that's right, I said "challengement"!) as we moved down the list. Also, it's been suggested several times now that an overhead projector would be a welcome addition to the Juggler's Challenge experience. That way, the conceptual input would hopefully be easily readable by both the Juggler's *and* the Challengers, increasing the general interest-in and understanding-of how the input was being interpreted in the music and lyrics. Hopefully more on that soon...

Back to the show:  We had a great crowd throughout the evening, with most people sticking around from first-to-last notes. The recording of the first set is a mixed bag. The music (after a couple of minutes of mild technical difficulty) is lively and diverse, but volumes were more out of wack and both mics were pretty far from the PA speakers, so you might just want to ignore the vocals rather than trying to follow the buried conceptual threads. I made some adjustments to both the mics and the PA for the second set and the lyrics/concepts are definitely starting to creep through here on the recording. The band was really cooking by this point and the audience was large and responsive. The whole show is worth posting, but if you're at all pressed for time, the second set is where it's at!

So yeah, check these out.  And, whether you were there or not, if you really liked a particular section or have some context or clarification to add, please call it out in the comments section here!