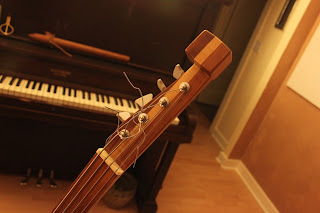 Here are the recordings from WEGO's July 27th 4-piece rehearsal for our upcoming all-acoustic performance at Sustainable NE Seattle's annual summer event on August 6th. In attendance was a quartet of Woody Frank (guitar and voice), Ian McKagan (guitar and voice), Jesse Silvertrees (keys, djembe, and voice), and Me Woods (bassbox and voice).

The vibe throughout was … well, let's just call it pleasantly disorganized. ;)) But the high-points were quite high indeed!

I don't think I fully appreciated the first third or so of this session, since a decent portion of my focus was on assessing the performance of the bass-box in its new steel-string (round-wound) configuration -- as well as the overall sound for the upcoming show. And things really *do* pick up noticeably as we go (I've even cut out a few signaling train-wrecks and such from early in the evening). But listening back, the first movements are great too in their own tentative way.

Here's a quick guide to what went down:

clip 1: Rehab, by Amy Winehouse (first time played)
clip 2: Rainbow Connection (just a shred of this is left here after removing various doldrums and signaling-trainwrecks)
clip 3: Droppin' the Deuce (don't ask me why I didn't cut this one out … it should be obvious! … actually, in all seriousness, this is probably the movement that loosened us up for what followed)
Between clips 3 and 4 I tuned up to standard 4-string bass tuning in an attempt to increase the volume. (I took out the bridge-bracing at the end of the evening, revealing an even louder bass-rich tone, but none of that is recorded. I don't think…)
Clip 4: Summertime, Sexy Back (probably my ballsiest, most-soulful delivery of this one yet), Eggplant (a tune by Woody … first time played and chock-full of swanky jazz vocal-harmonies!)
Clip 5: Ocean Waves, and something I'll just call "Free Dingy" for now (something that Jesse wrote by compiling the sleep-talking of his girlfriend).

While we probably won't go as far as to "drop a deuce", some of the sound and harmony from the later movements here have me thinking that next week's set should be a lot of fun.  (Send me your suggestions for 'Lyrical Standards' suited to a day of sustainability workshops!)
Posted by F R E E L A B at 11:17 PM No comments: 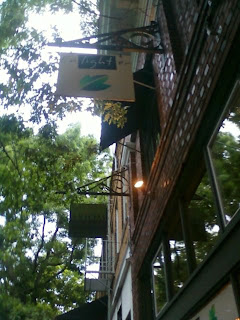 Woody played another fantastic and diverse set to kick things off, including a couple of favorites, a couple of surprising covers and at least a couple of other tunes that I'd never heard before. I think he has an acoustic album coming out soon! If it has half of the breadth, power, and ease of his live work, this should be one to pick up. (Unfortunately, I mistakenly thought I had already started the recording before his set, but it turned out it was just in standby mode until I double-checked near the beginning of his second tune … so there's a bit missing here.)

After that we launched a solid 70-minutes-or-so of WEGO. I slept on my homeward bus while listening to this set get started the other night, and my first impressions were that it was an unusually relaxed and dreamy show. Tentative beats built shifting vistas as Ian's rhythmic and spiraling guitar melodies wound their way into the morphing voices of my half-conscious mind.

It was my second show with the electric 5-string that I had borrowed from work, and for some reason a bunch of us decided to stand up to play. This combo seemed extra conducive to a certain danceable funk, but also seemed to revive my difficulties with playing bass and singing (not to mention limiting my ability to rock the foot-percussion as consistently). Part of it might be that the bass was actually loud enough that it seemed important that I maintain a consistent loop to my lines … which maybe encourages me to fit the words in around the bass, as opposed to the other way around. 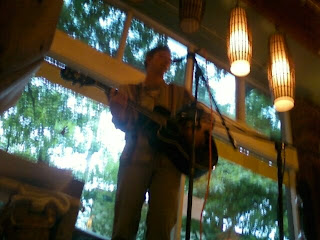 Listening back, I'm enjoying the percussion variety throughout the sonic field and the grooves and changes are rich as ever. But I'm also noticing that there just wasn't much vocal cohesion on this one … perhaps it was the standing…? For whatever reason, we very rarely built up any kind of harmonization or even our usual cascading 'rounds'. So, not a bad show by any stretch, but perhaps a little light on one of the major elements that makes us unique.

But man was it good to play with this group again! Five weeks is too long. I'm glad to see some increased frequency on the horizon.
Posted by F R E E L A B at 11:18 PM No comments: