Opening Jam
Set A
Set B 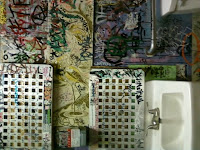 Here are my selections from last Sunday's all-improv set with John Beezer (guitar), 5-Track (bass), and Patrick Lenon (drums) at Le Voyeur, in Olympia WA. Oh yeah, Ian McKagan is on the kit for the opening movement.

A good deal of excitement had built up for me by the time this happened -- a rare opportunity to play with most of these guys. (Additionally, this was my first time playing back in my old college town in quite a while. I think the last time was at the Eastside club where I filled in for James Whiton's guitarist. But even that was several years ago.) And overall it was an enjoyable and often high-energy experience.

Unfortunately, it was also marred a bit by the "activities" of a particularly drunk and relatively insensitive local, who began to show up at the mic about 10 minutes into the warmup-movements and became progressively more difficult to dislodge until he was finally evicted about 2/3rds of the way into the set … sadly, not before most of our audience had headed out to the front for a break from the awkwardness. He wasn't even that bad of a singer, but it seemed clear enough that he didn't have the presence of mind to be able to determine how long of a guest-appearance was appropriate. (Helpful guideline: If you don't know the band, maybe join in for 3 minutes and take a break. If it was great, maybe they'll invite you back up. And give up if your dozenth request for "blues" is not granted!) And, as I mentioned, he was soooooper drunk. It's tempting to include some of the footage here, for the record and the laugh. But generally, this was a sad thing that I don't want to encourage. I was really looking forward to stretching out with these guys. We're all seasoned-enough improvisers to make lemonade, but it seems to me that this diminished what could've been. 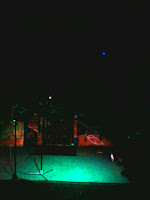 Nonetheless, the audience, *did* actually return for another brief series of movements, and even before that, plenty of interesting high-energy (almost tribal) groove-spaces materialized in quick succession. For some weird reason, it feels like I'm only using about 5% of my vocabulary in this set and the lyrical content never really takes-off, but the rest of the players are simply tearing it up and so it all works quite well.

So those are my clips! Beezer also recorded the set, with somewhat better placement (his nearly inaudible guitar is sometimes audible in his versions). He pulled out 4 solid sections more as "tracks" and posted them as an album on gemini.fm. I think I like his results better in this case. Check those out at: http://gemini.fm/awe91612/
Posted by F R E E L A B at 12:30 PM No comments: