Set 1 50 megs
Set 2 30 megs
Here are two sets by a drummerless-but-plenty-solid-nonetheless trio of TQ Berg (Destroyer), Colin Higgins (Electric Guitar...in his first appearance with NBP in several years due to his busy guitar-teaching schedule), and Me Woods ("Bass" + Loops and Vocals). 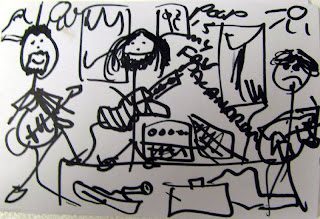 ...an anonymous artist's rendering is included to the left here.

The theme for the evening was Juggler's Challenge, and the first set is indeed partly influenced by input from the Listeners (Challengers). I set out 4x6 cards and a noxious Sharpie and -- much like the past two Juggler's Challenge Revival episodes -- sang/exhorted the audience to put anything on the cards that they thought might make interesting inspiration for music. First set we got a great page of lyrics (by a guy named David that I'm pretty sure I've met a few times at the Chai House before), and a beautifully-minimalist card with the words 'A Boy Named "Pines"' on it, and even a brief guest-vocal appearance by the afore-parenthetically-mentioned David. I still don't have the overhead projector that I'm certain will really kick-start this Juggler's Challenge concept for people, but it seemed that the small crowd was paying attention enough to keep up with what we were working on anyway. 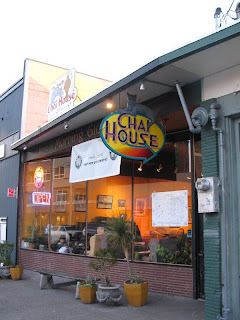 (Left: Daylight Savings Time had just kicked in the previous weekend. The abrupt change to setting up the gear before sunset is always cool and a little pleasantly melancholy somehow.)

Back to the music: In spite of my idea that I would try not to, "bass" was looped, and it did indeed seem to provide a nice bed for all manner of harmonic and textural exploration. All three of us were holding back a bit it seemed, allowing a gentle and spacious collective vibe to emerge. It's been a while since the last time all three of us played together, but it's possible that people besides me will hear a certain mutual confidence in our approach here. Nobody (except possibly that annoying bassist! ;) is trying too hard to "make it happen" and so the music is relaxed, even when it builds energy. Speaking of energy, anyone who was there for the "great bass-induced power-amp explosion of 2009" (see "Ninja Poodles on Beets" below), might be mildly entertained to hear that I had replaced my deceased neon-brown-era power amp with a wildly overpowered hEEnd-era Peavey CS-800. It performed admirably, though I fear that with repeated uses my back wouldn't! 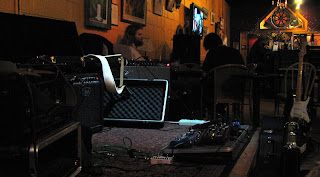 The crowd was significantly sparser for the second set, and so -- partly due to my neglecting to mention the format for the evening again -- my only themed-utterance was mockery along the lines of "Screw you guys for not providing any input in the second set!" But the trio's approach really seemed to grow a bit here, with a less reserved and even less idiomatic approach to our weaving and tumbling lines.

So that's about it on this one from me, but please add your own comments here if you were there or listened to the recordings and noticed anything entertaining that I might've pointed out.
Posted by F R E E L A B at 8:21 PM 4 comments:

Set 1 47 megs
Set 2 32 megs
(+ Bonus Timelapse Movie of the second set 4.7 megs)
February 25th started with a trio of me and two guys I'd never played with before: Noah Adler (Mandolin) and Aaron Stepp (Fretless Electric Bass). The funny thing is that it wasn't the first NBP for either of them! Both Noah and Aaron made their debut at the previous month's acoustic-orchestra night, during the first week of my new baby daughter Lucy's life -- when even dragging an acoustic guitar to the Chai House was still sounding a little ambitious and off-topic...though if it had been a week later, I would've loved to have brought her out to just sit on the couch and drool to the grooves. (I believe that unrecorded evening was a quartet of John Beezer (Guitar) -- in his last NBP before his move to New York City -- Dennis Jolin (Nylon String Acoustic through Wah), and Aaron and Noah...supposedly, it was very mellow and trance-like that evening, and -- I'd guess from my more recent jam with them -- awesome.)
But back to the February: What a great trio it turned out to be!! 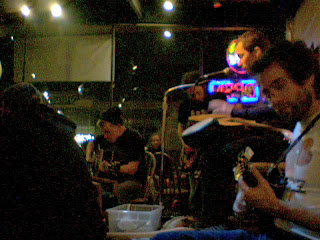 We discussed possible signals before we started, but ended up having plenty of momentum and diversity to quickly forget them. I was admittedly a little rusty from lack of recent fretboard time, but Aaron and Noah were sharp and versatile and it seemed we quickly found and explored a common love of what I'll try to describe as "tweaky odd-time groove mutation" -- where a group locks in on a repeating syncopated line and then each player in harmony gradually pushes the rhythm and angles further and further away from the path of least resistance (see 15:30 or 36:30), while simultaneously maintaining a consistent and well-defined meter. The level of attention required for this type of playing almost by necessity becomes exhausted from time to time, and so we would break down (probably a welcome breath for the listeners as well) into a wide range of more spacious and conventionally-rhythmic movements as well. I'm already looking forward to next time with these guys. (Oh yeah, and the "lyrics" that creep in from time to time during this set were from the back-page-classified-ads from the Stranger.)

Second set, we were joined by the always melodic, energetic, and inspiring Chris Powers (Acoustic Guitar), briefly by a percussionist who I don't believe I'd met before, and eventually by Daniel Nelon, whose smooth and modally innovative vocal work carried us to the end of the set and decorated a sweetly-harmonized "last call" right before the final bell. 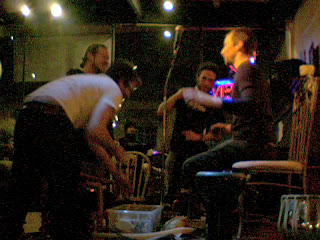 Daniel is always a great addition, but after the brief taste of 'what-could-be' here, we agreed to bring him back for more of the show on a day when I've got more lyrical creativity and we can really explore the chorus-harmonies! I'm looking forward to that too. :) ...and also to any listener or player comments on this post or on your experience of the show or recordings. Please add them here in the comments section!
Posted by F R E E L A B at 9:14 PM 8 comments: