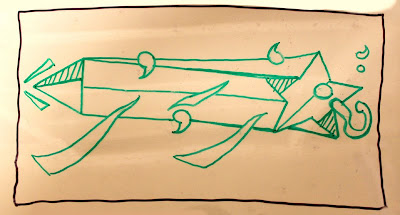 Here we have Juggler's Challenge Revival Episode #23! The high number of defectors this evening \ ; { ) > left us with a percussion-less electric trio of TQ Berg (guitar), Donovan Raymond (standup-bass and rap-master) and Me Woods (keys and voice). As a juggler's challenge event, this was probably not as traditionally effective as the last one with nearly the same lineup (skip down two posts to October's), but it *did* feature some fantastic and relatively-musical "out"-style playing, and at least a couple of memorable Juggler's Challenge gems.  (Speaking of!...  I just noticed -- after upgrading to the new blog-editor here -- that the editor is now setting these images up as links to the larger images that I upload to the site, so if you're not seeing as much detail as you might like, from here on out, you should be able to just click on the image for a larger view.  Very cool!  :) 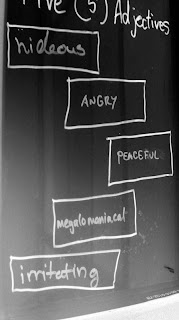 The location of the mics (low and directly in front of TQ's amp) probably isn't ideal here, but the recording works anyway, on the strength of TQ's consistently inspired playing. In "andrew's gear" news, this was my first show running the keys through my guitar-FX, and I really like the results! Mostly, I enjoy the simple tones of the keyboard, but I like how the pedal-rig allows me to manipulate the sound on the fly a bit, as well as capture a loop now and then when appropriate. The one thing I should probably add to this process is a little more time setting up a pleasing EQ through the PA before I get started, as I tend to find myself just rolling off more and more of the high-end on the keys as the volume ramps-up over the evening (which seems a little more crude than optimal :). 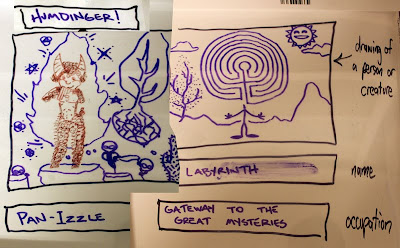 So, since I'm a couple of weeks behind here, I'm gonna leave it there for this one. I realize this is another rather stripped-down entry, but I encourage you to call out any personal highlights in the comments (as will I, when I get a chance to listen again). The good news is I'm now finally finished with production on the iPhone game I've been working on with game-developer Kevin Kinell and artist Dylan Sisson (www.yipe5.com )! So not only will that be available soon, for anybody who's interested and has a compatible device, but my upcoming show-entries here should be more timely and substantial again for at least the next little while.
Posted by F R E E L A B at 6:09 PM 2 comments:

Here's another Woodland Acoustic Orchestra show, featuring a stirring quartet of Dennis Jolin (Percussion and Voice), Ian McKagen (Guitar and Voice), Jesse Silvertrees (Djembe, Piano, and Voice) and Me Woods (Charango, Trumpet and Voice). I had a lot of fun this evening! A pleasant sense of abandon bubbled throughout, with just enough cohesion to keep us moving through distinct realms and passages.

The Chai-House-Provided theme for the evening was "Hallo-Fiend Band-Snatchers", and indeed we were missing quite a few of our regulars. Just who could these band-snatchers be? I for one am beginning to suspect the minions of my old nemesis "Idle Hands", who has also managed to gobble up all of the time that I had intended to put into writing up this post and instead confuse me into creating music and sound-effects for his first ever videogame . Typical!! I'd already spent several weeks as his captive, crafting a "theme-song" for the occasion of the release of his Vinyl Toy. This latest project is a new (iPhone based) installment in Kevin Kinell's clever and highly addictive old-school RPG, "Yipe!", with all new art by Idle Hands' principal minion, Mr. Dylan Sisson.

Perhaps, if I can escape Mr. Hands' clutches over the next few weeks, I will write up an addendum to this post highlighting some of my favorite musical passages from the evening, but until I'm free again I'll have to leave any of that sort of detailed documentation to you (here in the comments). Pray for me! And, if you get a chance to put together a care package, I really enjoy candy-corn (and my nails could use some filing...hint, hint...ahem).
Posted by F R E E L A B at 5:47 PM 2 comments: