Here are the recordings from the Woodland Experimental Groove Orchestra's first ever appearance at the Enlighten Cafe in Ballard. Though we hadn't played together since well before the holidays (perhaps over a month earlier), the musical interaction was confident, energetic, and playful throughout. And shit!: the Enlighten Cafe is such a great place. Great location, great sounding room, beautiful and comfortable decor, and great people working there and wandering in to eat, drink, and listen. If you missed it, you definitely missed something, but don't despair, because it seems as though we're going to be playing there again! 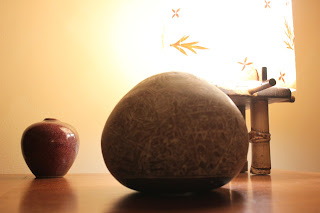 Ian McKagen opened the evening with a half-hour set of guitar and voice -- the first I'd ever heard from him. We ran into some fairly severe technical difficulties with his sound-hole acoustic pickup, resulting in some sporadic and occasionally humorous radical shifts in the sound. But Ian was cool and flexible throughout, modifying his arrangements on the fly to make light of the situation and keep things flowing. Eventually, he ditched his vocal mic entirely and finished out the second half of the set in nearly full-acoustic mode, filling the room with a sweet set of soulful originals. In fact, hearing his clear voice open-air for the second half of the set really drew my attention to what a great-sounding space we were playing in.

After that, we squeezed in a medium-length and a short set of WEGO (probably a great overall mix for a Thursday night). Orchestra for the evening was Woody Frank (guitar and voice), Dennis Jolin (ukelele and percussion), Ian McKagen (guitar and voice), Jesse Silvertrees (djembe and voice) and Me Woods (bassbox, voice, and occasional trumpet). Whether it was fool-hardiness or inspiration, we decided to shuffle the lyrical standards and assign them randomly rather than having everyone lead the ones that they'd been most commonly singing. And, at least from my perspective, it was a great success … something I'd like to establish as tradition. Since we were each working from a pile of sheets that we weren't used to, we even hit a bunch of new ones that we'd previously printed out but never seemed to make it into the rotation in previous shows, as we each would tend to stick to the ones we felt most comfortable with. So you'll hear many (though not all!) of our classics here for sure, but also a few first performances -- including Woody's first take on "Sexy Back" by Justin Timberlake and Jesse's completely unplanned introduction of "The Rainbow Connection".
Posted by F R E E L A B at 10:20 PM 3 comments: