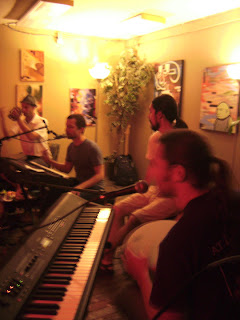 Thanks to everyone who came out to the first 'Woodland Experimental Groove Orchestra' show!! In spite of the fantastic weather, a few of our core members being unavailable for the date, and the unfortunate coincidence with the 'Tool' show at Key arena, we managed to mostly fill the Gypsy Cafe with generous listeners. (This was my first ever show at the Gypsy. Man, what a sweet space! Feels great, sounds great. I really hope they'll have us back again.)

All in all, it was a super-solid, and occasionally awesome first-show for the project, featuring a well-seasoned quintet of Michael Chapman (horns, percussion, and vocals), Dennis Jolin (ukelele and vocals), Abraham Neuwelt (electric and acoustic percussion and vocals), Jesse Silvertrees (djembe, keyboards, and vocals), and Me Woods (keyboard-bass, treble, and vocals).  The 'Lyrical Standards' were hitting pretty hard throughout, including a first-ever version of a rather-well-known song by Queen.  In talking with friends at set-break and closing, I was psyched that long-time listeners seemed to genuinely appreciate both the sound and the concept, and felt that the group already showed great potential beyond some of my previous all-improv experiments. I fully agree! And the fact that most everybody in the group is actually offering constructive criticism and helping plot our next-steps makes it feel like we might be onto something good here.

Check out the recordings and let me know what you think!

(Photo stolen from Dennis' FB page -- which explains why he's not in it … another friend was taking photos as well, so I'll probably post a couple of those when I can get them.)

Update (August 29th) ... finally found the other photos from David and Naoko in my inbox!  (...still no sign of Dennis, but some closer looks at Abraham and Michael here) 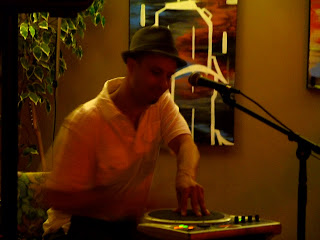 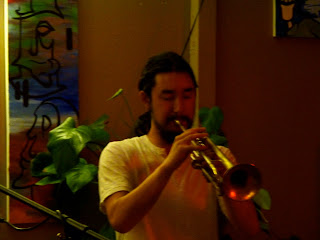 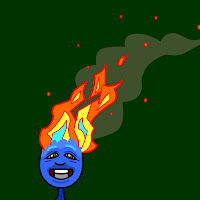 Here are the recordings from our last get-together (on June 30th) before our first show (at the Gypsy Cafe on July 10th). The lineup for this recording is Chapman, Jolin, Kristmann, Silvertrees, and Woods.

There are a couple of slow patches near the top here, so I've done a tiny bit of pruning right at the beginning of the first set -- removing a tad of the opening build-up and the first half of Crazy Train (which, with the exception of the remaining chorus, is better represented in our earlier recordings). I did, however, decide to leave in the brief call from Tina right after we started up. The background banter, which I hardly noticed at the time, cracked me up on first playback. Beyond that, and some solid versions of several of our established lyrical standards, this rehearsal also features our first ever "Light My Fire" (lifted from the radio on my way over), and our first inclusion of the 7/4 motif in Tom Sawyer.
Posted by F R E E L A B at 7:57 AM 2 comments: 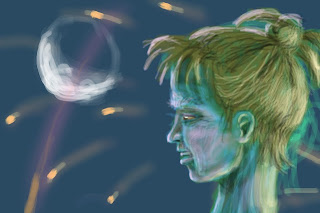 Okay, I know I said I wasn't going to put any more clips of the new group up until after our first show, but these are just too good! (And there are some even better ones from last week's rehearsal, that I'll probably have bundled up by the middle of next week.) Besides, nobody but the band is really following this blog right now… right?

These are from our June 6th get-together, our first with Daniel (need to look up his last name) on guitar and voice -- mostly sitting out as he absorbs the general concept (you'll hear quite a bit more of him in the next post). Players for the evening were Dennis, Ian, Michael, Abraham, Daniel, Jesse, and me. After our usual rehash of the basics for newcomers and a special presentation of the Gestural Signaling Language (…near the end of the previous get-together, we had decided to convert most of our pre-codified verbal signals to hand-signals and I had written up a rough pass at them in the interim), we started the night still missing Michael (who showed up mid first-set) and Ian (who arrived just as we were wrapping up the first set).

The first set seemed to start a bit slow, and I made quite a few edits for its presentation here, but it's still chock-full of interesting movements, including a surprisingly emotional version of 'Crazy Train' right near the top and a pleasantly loose and lively 'Pour Some Sugar' later on. At the break, we set up Ian's rig and launched into a solid (and here unedited) second set that ran the gamut before closing with our first ever version of 'Tom Sawyer'.

Sadly, this jam marked Ian's departure for 2 months to fish in Alaska for the Summer, so he won't be there for the show on the 10th. But I'm greatly looking forward to roping him (and hopefully his fishing partner -- and fantastic guitarist/vocalist -- Woody) back into the lineup when August returns him to Seattle.

Man am I looking forward to the Gypsy Cafe show! Here's a flyer: 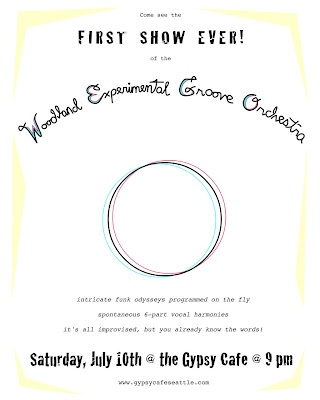