Hey All! Here's another great Juggler's Challenge Revival show, featuring a drummer-less electric quartet of TQ Berg (Guitar), Dennis Jolin (Guitar), Donovan Raymond (Bass and Rapmaster...more on that later! :), and Me Woods (Keyboard and Vocals). By Tuesday, efforts to find a drummer for this one already weren't going well, and so I decided to see what would happen if we tried an electric group without drums. We'd done this before, but usually with an attempt to fill some of the gap with looping. This time, since I knew I'd be racing over from my soccer game at the last minute, I decided to forego the loops -- and even the vocal fx -- and just showed up with an old Yamaha keyboard and a mic. 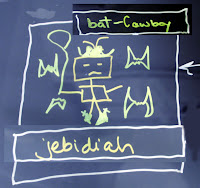 I have mixed feelings when I say it was a *huge* success for the format! ...mixed because I know so many fantastic drummers. But the vocals were effortlessly audible throughout the evening here (a first for the new format...I greatly enjoyed the opportunity to *sing* more and shout less :), and without the looping, the music organically rose and fell orchestrally in response whatever the movement desired. Even though the guitars are usually what buries the vocals, it seems that it's the drums that set the volume that push the guitars into that territory. Perhaps I can convince some of my drummer friends to come out with simplified hand-drum setups for the next few of these...? I'd really like to try this again!
TQ and Dennis were like stereo treble magic all evening long, 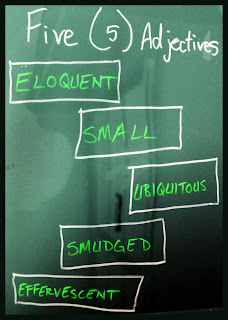 both playing rhythmically and texturally in a way that elevates the guitar beyond it's stereotypical role in rock music. Both of these guys really work from their tone. They seem to build reactively off of whatever sound is in the air and this really keeps things true! Donovan was typically brilliant on the bass and supplemented this with some ground-breaking work on his Realistic (TM ;) Rap-Master. A tiny radio-shack keyboard with an attached microphone that packs in a couple dozen (?) "awesome" keyboard voices and somehow allows you to sing through a weird shiftable harmonizer at insane volumes without feeding back. There is truly something weird going on with that mic-setup! It would audibly harmonize casual conversations at the other end of the room right through the PA, but wouldn't feed-back unless pushed to ridiculous levels and would nicely clamp any close vocals down to a pleasant dirty crunch. Donovan worked this and his bass (alternately and simultaneously) throughout the evening to truly spellbinding ends.
Thanks to the donated Yamaha from my mom, this was perhaps my first real appearance on keyboard since my last cover-band in the very early 90's.  Oh the memories...  (shiver) 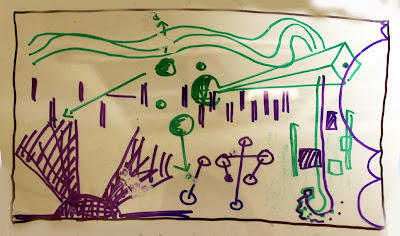 The audience of Challengers for the evening was certainly small in numbers (tiny actually!), but giant in inspiration. The photos from this post include just a few of the sheets they provided. In a way, it was great that it was so slow. It felt a bit like an intimate house-party, and Chloe even had enough time to complete a few sheets -- including two of my favorites: Set 1's epic closer, "Oh Shit, It's a Cactus!" and perhaps our most abstract graphical-score to date (which -- I think -- opens Set 2). 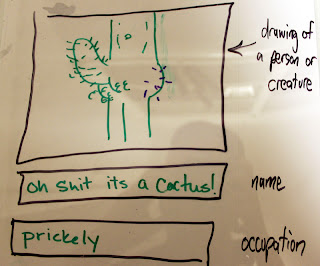 So that's about it for me on this one, except I'll just say that switching back to recording with the external mics (as opposed to the Edirol's built-in pair) has been well worth it! The recordings have been really rich and spacious renderings of the evening's sound. Check 'em out! And let me know what you think here in the comments...
Posted by F R E E L A B at 10:06 AM 3 comments: 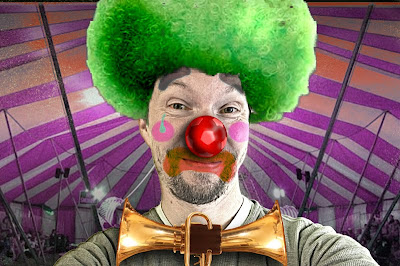 Here's a fresh and ultimately very satisfying WAO performance. The Orchestra for September included TQ Berg (v-bass and voice), Dennis Jolin (percussion, electro-uke, and voice), Ian McKagen (6-string and voice), Jesse Silvertrees (djembe, other percussion, and voice) Adrian Woods (percussion at the very end of set 2) and Me Woods (charango, trumpet, percussion, and voice). The Chai House had provided the theme "System of a Clown" for the evening and it was a great springboard -- both lyrically and, eventually, energetically.

By browsing the parentheticals in the list above, you can see there was quite a bit of instrumental diversity this month! It was also fantastic to have so many players adding their voices throughout the evening. Jesse (in his first -- and hopefully *not* last! -- NBP appearance ever) not only brought a new depth and solidity to the groove with his tasteful Djembe playing, but adeptly jumped right into the mix with great signals and vocals both. TQ, in the absense of "Filthy" on bass, gradually brought in more low end and contrapuntal rhythm as the evening progressed, building up the mass and momentum of the sound in a smooth trajectory aimed squarely at 10:00.

The first set featured a few bumpy patches, interspersed with sporadic brilliance. I perhaps took a little of the creative wind out of our sails by encouraging signalers to focus on structural -- as opposed to thematic/story -- signals. Usually we get our legs under us by charging off on a collective realization of something like "Bamboo-Lord Deals Robotussen". ...which is also fun! :) I was interested in bringing out more of the hard-shifting, challenging odd-time grooves that the WAO format is capable of. (I think my revised approach would be to encourage people to simply supplement any conceptual signals with a structural one.)

Granted, the structure of this show strayed a little further than I would generally like from the core strengths of the 'Acoustic Orchestra' format (mostly around the two goals of intentional-ambiguity/overlapping-threads and playing *through* the signaled-changes). But I realize now that this is mostly due to the gradual influx of so many great new players, and I think I should be able to easily bring some of those elements back with a simple review of the tools before the next show.

So, all that being said, many of the signaled changes still pack a nice wallop here, and many of the "songs" from this particular evening are unmatched in recent WAO history. Truly spontaneous, sprawling, and vibrant...ecstatic collective tributes to the concept of the moment! My personal favorite is probably the first set's "It Aint Easy" (starting at around 29 minutes in). The whole celebratory movement builds gradually against Ian's and my traded verses, with some spot-on clown-FX from Dennis gleefully slapping us in the face like a pair of size-22 shoes. And the brief second set is nearly all gold!
What was your experience of the flower-spray?
Posted by F R E E L A B at 8:57 PM 4 comments: