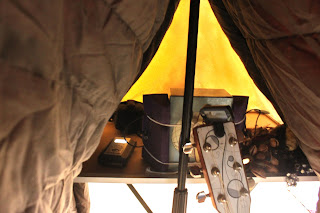 Here are a couple of quick edits of some solo guitar-and-voice improv. The first clip takes place in the bathroom, as I warm up for the very first session of an as-yet-unannounced recording project with some free-association around my recent near-full-time habit of wearing a knit cap to mute the damp Seattle winter chill. The second clip is from this afternoon in my "basement" (glorified crawlspace) during my final capture session of the project. Here, clumsy noodling gives way to an extended unison guitar/voice lament on the circumstances that have numbed my fingers.

So yeah, I'm working on a possible thing. If the editing of the intended (composed) material for the recording yields anything interesting, you'll be hearing more soon!

(photo also from today, from inside of a temporary sleeping-bag-hut capture space)
Posted by F R E E L A B at 10:58 PM 2 comments:

Here's some material from our short set kicking off a night of music to raise awareness and funds for a group called "Justice Works". This particular event ("Justice Rocks") was focused on reforming Washington State's 3-strikes sentencing law, a great cause in my book!

The orchestra for the evening was an acoustic quartet of Woody Frank (guitar and voice), Ian McKagen (guitar and voice), Jesse Silvertrees (djembe and voice), and Me Woods (bassbox, trumpet, and voice). At our 6:00 sound-check -- even before Ian had arrived -- it was obvious that the sound was going to be rich and responsive on stage. We did have a few technical difficulties getting Ian's guitar amplified later on, but I think for the rest of us the mix was unusually warm and balanced, and the easy visual and sonic communication immediately inspired cascading waves of relaxed but energetic improvised groove.

I had forgotten to transfer my portable recorder back into my gear bag after my recent trip to Hawaii, so the thin, weirdly compressed, and often distorted mono documentation posted above was captured through the built-in mic in my laptop. It's not the cleanest or highest-fidelity of our mp3s by a long shot, but I think the performance warrants a listen anyway. Tina also managed to capture a brief video clip before Lucy got creatively involved in the filming, so I've posted that as well.

For me, this was a very satisfying kickoff to our upcoming acoustic phase! (As always, please add your own thoughts and editorializationifications in the comments below.)
Posted by F R E E L A B at 10:23 PM No comments: 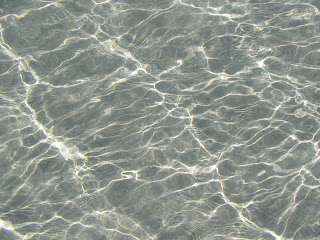 Here are the recordings from our second acoustic get-together (our first after deciding to try shifting to an acoustic format for a while). Dennis was unavailable for this one, so it was just Ian (guitar), Jesse (djembe), Woody (guitar), and me (bass-box and trumpet). As expected, the vocal interaction was fantastic in the new space between the shorter-sustaining acoustic events. And to my ear, there was at least as much dance in the sound.

(There was a third and even longer set with plenty of really interesting movements and probably more experimental playing, but since this was Woody and Ian's second back-to-back rehearsal of the day, and I was fighting a pretty bad chest-cold (which will be obvious if you try to listen for my voice and realize that the only one left unaccounted for is the wheezing falsetto that sounds like a cross between Tom Waits and a female soul singer who's spent the past week passed-out in the gutter), we also ran out of steam in places, and again I'm too busy/lazy to mine out the good bits, so I've just the final set out for now.) 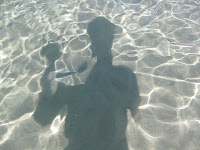 So, enjoy! Minus the missing players -- Dennis, Jenny, TQ, and whoever we else we manage to rope in…? (Drop us a line if you know somebody who would be a good fit!) -- this is the basic sound we'll probably be working with for a while. I'm looking forward to exploring and expanding from here. And as always, whether you were there at the time or have downloaded these mp3s onto your phone and are listening on the subway in the other Washington, don't hesitate to add your own comments here below!
Posted by F R E E L A B at 9:22 AM 6 comments: 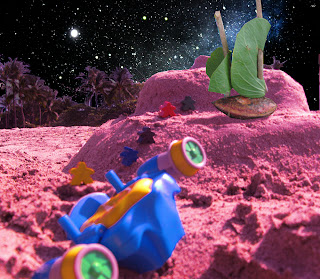 Here are the recordings from WEGO's November 20th show at the Shipwreck Tavern in West Seattle. The evening started off with a super strong opening set of guitar and voice by Woody. I don't think I had heard him play solo-acoustic in at least 2 years, and it felt like he had shockingly come into his own in the meantime! This tradition of opening sets by a different WEGO member each time is turning out to be a damn-good idea. I'm already looking forward to a Ian's set next time we get to play a full night.

After that it was two full sets of the Woodland Experimental Groove Orchestra. This was the show that convinced us that we needed to try switching to a more acoustic format for a while. We *almost* followed our new amp-aiming rule (see previous post) and it *almost* worked. (As testament to its potential effectiveness, notice how the one amp that wasn't tipped up monitor-style is much louder than the surrounding rumble.) However, by the end of this show, it felt like we might have a bigger problem than just balancing the volumes. After some thought, it seems that there's just an inherent expectation-problem when you've got 3 or 4 instruments all running through 12-inch cabinets. Generally, that sound works pretty well for really loud volumes. A full drum-kit and a large bass-amp can keep up with that and make it sound appropriate, but with hand drums and just another 12" cabinet for the bass, it ends up feeling like you've got two completely incompatible bands playing on the same stage because they were double-booked and are trying to get along. Because the sound has a "rock" timbre, but is under-supported, the guitars tend to try to play more to fill things in, which only makes the sound more unbalanced. It's a vicious cycle. On the other hand, acoustic instruments and hand-drums marry quite well, with no reduction in the ability to dance.

So, I'll definitely miss the sounds of my new synth rig (perhaps it'll return eventually, even in the acoustic format), but last night's all-acoustic rehearsal was perhaps the best WEGO yet, and really has me convinced that acoustic is the way to go. Plus, it'll give me a chance to focus on the possibilities of the newly-improved acoustic bass-box and even dabble in some sporadic trumpet action.

But back to the Shipwreck show! In addition to the paradigm problems touched on above, we also had some pure physical musician-placement problems (and possibly some beer-problems ;) that exacerbated the effect of some sloppy signaling. If you listen carefully, you'll definitely hear us trying to verbally work out the intended meaning of a signal several times throughout the night. But these kinds of train-wrecks are all part of the potential of the group and from what I can tell from the audience's perspective are far outweighed by the fun of watching us try to program the music on the fly. There were a couple of previously-unknown guys in particular who showed up near the end of the night and for whatever reason immediately understood and enjoyed what we were doing. It was a nice synchronicity when one of them shouted out "Tom Sawyer" -- one of our regular Lyrical Standards until quite recently. So Tom Sawyer it was! 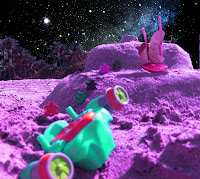 (text from sometime last week during the winter storm in Seattle ... image from Kona, Hawaii this morning ... nut-stick-and-leaf boat sculpture by Ketil Jonsson ... sand castle by Tina and Lucy and Ketil (and here's how Ketil wanted the colors to look))
Posted by F R E E L A B at 10:26 PM 4 comments: