Map of the Woulds : October Jam 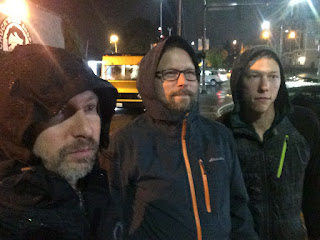 Here's another exploratizing 'Map of the Woulds' warmup-jam with Woody on Bass and me on Guitar.
Posted by F R E E L A B at 11:03 PM No comments:

Here's a short warmup jam from the session where 'Map of the Woulds' captured their live-at-home video of "Under the Tent".  As with 'Under the Tent', Woody is on Bass on this one and I'm on on guitar.
Posted by F R E E L A B at 5:57 PM No comments:

Map of the Woods at the Fremont Fair!

Here's a brief clip of the jam at the end of "Under the Tent", as we gradually transition to a drum solo and switch from Andrew on guitar to Woody on guitar.

This was a fun live debut for the three of us!  Thanks to all of the generous listeners who joined us!

Map of the Woods Prep for the Fremont Solstice Fair 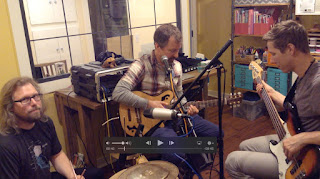 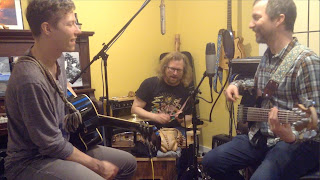 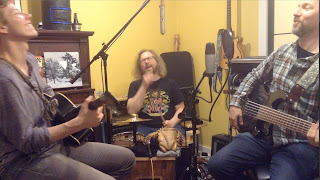 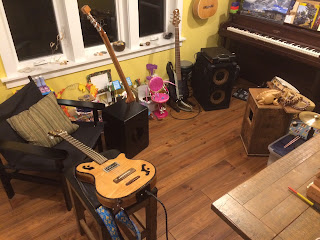 Here's the warmup jam from our recent session in West Seattle.  Woody is on guitar for this one, me on Bass, and Adrian is playing my half-baked whisper-kit (TM) of percussion.
Posted by F R E E L A B at 2:50 PM No comments:

Here are a couple of short warmup jams for each of the two instrumental configurations we've been working with.  The twist for this night is that we were convening in Woody's lovely apartment and so Adrian was playing a few small pieces of percussion with chopsticks and the bass was running through my ancient and tiny all-purpose practice amp.  The bare sound simultaneously brought out both restraint constant exploration of the boundaries.  I think great things would've happened if we just kept jamming, but I'm soo glad we switched our attention to the compositions.

This was one of those nights where I wish I'd just recorded everything!  Especially while working on arrangements, the stripped-down setup made it so easy to hear each little sound and vocal harmony and somehow the grooves were extreee detailed and infectious.  Lots of surprising progress on some under-construction compositions!  Looking forward to more very soon.
Posted by F R E E L A B at 5:50 PM No comments: