This was to be the first Juggler's Challenge Revival episode with the new overhead-projector, and so I expected a bit of extra complexity during the pre-show setup. What I didn't expect was the Chai House's already-hobbled PA 'jumping the shark' sometime over the previous 2 weeks. It's hard to even recreate in my mind the bizarre configuration in which the remaining barely-functional speaker-cords had been hooked up to the power-amp, but the net result was about 40 minutes of fussing with it only to achieve a mono signal with the highs and the lows located in completely different parts of the room. I'll test it again over the next few shows to see if it improves, but from here on out, I'll also be lugging along my own PA, just in case.It took a while to get the Challengers going with the new transparency-based input (I'm suspecting that my attempts to cajole them into action were being translated into a muddy jumble by the remaining PA components.), but we actually get our first transparency up and projected before the end of the first set (the "innuendo-fueled-buttrock-anthem"). And, thanks to some spacious and synergetic free-grooving by the band, the half-hour wait was quite enjoyable (for me anyway :)!

Interactivity really picked up for the second set, with a second mad-lib song (the "fuzzy" love song), a great 'musical-experience-in-10-words-or-less', and a sweet tune based on a set of lyrics written entirely by the Challengers. We even got our first ever abstract-graphical score designed in the way that I had imagined they would be! Kudos to David Kimber for drawing something that was actually abstract and which could reasonably be interpreted from left-to-right. I sorta botched the directing of it (once we had set our 1-minute time-limit, it would've been better for everyone to just glance at the timer to help them determine where they were in the score rather than wait for me to advance the marker, which of course I wasn't doing because I was playing :), but I'm going to post a photo here, in case it inspires any future score-artists to build on this very elegant concept. Note that the staff-line here isn't literal (with only 4 lines)...only suggestive. Rockin' good! 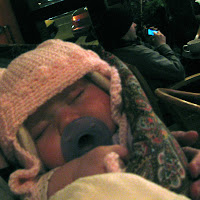 Well, that's about it for this one from me. But again, if you were there or are listening to the recordings, feel free to add any entertaining details that I might've forgotten here in the comments section.

(Oh, another quick note: Near the beginning of the show, I announce "Weds, April 8th, . But that was just the flavored syrup talking...this show was in fact recorded this past week, which is well into 2009.)
Posted by F R E E L A B at 9:03 AM 2 comments:

Here is a prologue and two sets by a small-ish Acoustic Orchestra of Dennis Jolin (joining me in the prologue and throughout the evening on various percussion, melodica, and even banjo for a brief second), Aaron Stepp (laying down the magical idiosyncratic grooves on Fretless Electric Bass), Donovan Raymond (Piano at the end of each set) and Me Woods (mostly Guitar and Voice, with brief stints at dumbek, wood-blocks and manual-tube-driven-voice-leslie). 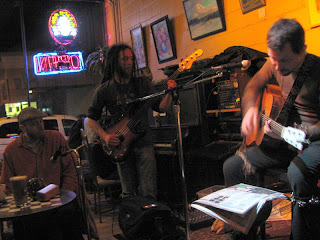 I had thought this might be one of our larger Orchestras, but -- true to form -- I sent out a very late reminder to the musicians (well really I just forwarded the show-listing with their names in it) and by 8pm it appeared that it might just be Dennis and me...which it actually *was* for the 10 minute prologue...but Aaron showed up with his bass towards the end of that, and we even added Donovan Raymond on the Chai House Piano for about 10-20 minutes at the end of each set.

This was a weird one for me. There was a huge appreciative audience the whole evening, with lots of friends in attendance, and I knew we had a great group of musicians, but with the PA speakers' super-wide spacing (about 12 feet off of the edge of each side of the stage) I was having a hard time hearing things in balance and so was struggling to find harmonic/rhythmic coherence and a place to settle in the mix. My playing in particular felt like it was lurching along and tripping up the beat fairly regularly. Even the vocal additions (from the Ballard News Tribune and the want ads from the back of the Seattle Weekly and the Stranger) seemed precariously perched atop the crumbling grooves. (And the 'Super-Barista' in the second set is a nearly incomprehensible hideous sprawling beast that only a fan of the most disorganized overlapping melody and lyrical wandering could love!) But then, near the end of both sets as Donovan would join in on the Piano, we'd all work through a challenging 5 minutes or so of trying to figure out how to play in the new landscape before being suddenly and mysteriously overtaken by a wave arising from nowhere and carrying us to the climax of each set on a smoothly building drone of ecstasy. (Start at 27:00 in set 1 and 17:20 in set 2 to jump right to these portions.) Listening back now, I'm actually enjoying most of the night here, and I'm particularly blown away by how many different sounds are coming out of Dennis' area of the mix...some truly diverse and well-seasoned hand-percussion!

The recording here suffers from some of the same problems as my ears did at the time: My cavalier attempt to not over-think the positioning of the mics has positioned them too far from the PA speakers and too close to the percussion and especially my dry leg shakers. If you start playing each set at a volume that sounds appropriate for the wash of cracked nuts that comes first, you'll end up feeling like you're listening to a guy shaking a rattle in time to a band that's playing in the other room. 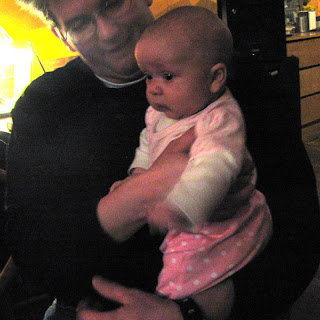 If, on the other hand, you imagine that you've walked into a jam-party late enough that the only available seat was right next to the guitarist's brashly-rattling leg, perhaps it's possible to tolerate a volume where you'll be able to absorb some of what the other musicians were up to. I've also done my best to apply some selective EQ and compression, slightly improving the balance.

My left leg was sporting a new set of bells that -- as my partner Tina will readily attest -- I spent several evenings tying onto various unsatisfactory leg-attachment devices before settling on an "elegant" system that knots them into a single length of panty-hose. It took at least 3 minutes or so before individual bells began tumbling loose onto the stage (...but there's a simple fix for that which I won't go into now :). 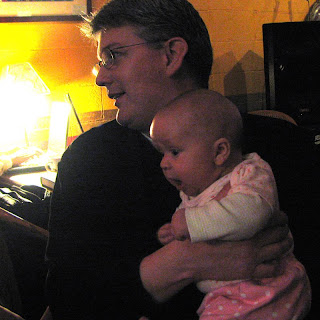 This night was *also* the first Chai House visit of my 9-week old daughter Lucy (pictured here with our friend Melvin) who, to my slight surprise and great delight, seemed to really enjoy herself -- apparently staring intently at the musicians and wriggling aggressively throughout the first set.
Posted by F R E E L A B at 1:29 PM 4 comments: