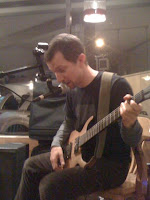 I just haven't been pulled to experiment with my various loopers as much recently, but when the chance to play the yearly-ish Atomic Lead comic-release party came up again, I couldn't resist dusting them off. Well over 3/4 of the measly practice time I had set aside evaporated just trying to decide how I was going to configure my sound. Most of my recent playing has been at least semi-acoustic and has oscillated between the extremes of just-me-and-my-acoustic and freejamming-with-5-other-musicians, which probably explains why I put together the sonic-palette that I did. After all of that open music, the usual dense hypnotic polymetric wall of overlapping micro-grooves just seemed a little too ... well ... dense, hypnotic and wall-like. And maybe a little too safe/obscured. So most of this year's show was just simple textural or minimalist groove-loops on one of the line-6s, spilling whatever crossed my mind out on top through the other channel. A little more space ... a little less urgency and agitation perhaps. More room for surprises. But as always, not too attention grabbing, so as to work as background for the event (perhaps this isn't a situation in which one expects to have a break-through performance, but I just try to play to the room and see what happens...).

It had been so long since I'd worked much with loops at all that it wasn't until the 2nd set that much ease and flow developed. Factoring in the tasty morsels from the first set and the overall length and exploratory vibe, I'd sortof rather be presenting a super-condensed highlights-only recording, but no time no time! So this is everything after the very earliest lopped-off noodlings from the top of the night. (I'm hoping you'll forgive me in the retrospective light of the better things coming around the corner soon. :)) Actually, the whole thing might work better if you listen to the 2nd set first and then decide if you want to dive into the somewhat-less-consistent-but-idea-rich 1st set.

This was a direct-from-the-board recording, so most of the leg-percussion and occasional noodling with the table full of percussion toys is lost here (possibly for the best), but there are some occasional neat effects where the crowd noise bleeds through the main vocal mic with one or another bizarre vocal-fx patch making it sound like the processed field recording of a dinner party. Also lost with the lack of an open-air mic are the justifications for the periodic extended disappearance of any new material over the loops, as people frequently approached me to discuss the gear and/or process mid-set.  (Thanks to Billy Harper for the photo ... and thanks to Edward and the other artists for another inspired issue of Atomic Lead!)
Posted by F R E E L A B at 11:04 PM 3 comments: