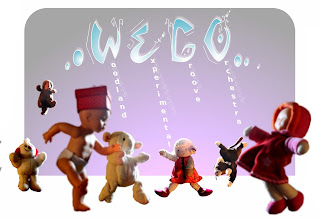 Here are the recordings from WEGO's February (2012) show at the Enlighten Cafe. The orchestra for the evening was Woody Frank (guitar and voice), Dennis Jolin (uke, light-theremin, etc…), Ian McKagan (guitar and voice), Jesse Silvertrees (djembe and voice), Evan Strauss (bass and voice), and Me Woods (dumbek, glockenspiel, trumpet, charango, and voice).

This was a strong show, opening with a rare mostly-instrumental mood-jam that lasts fully 15 minutes, eventually giving way to a nice mix of both seasoned and first-time lyrical standards ... plentiful momentum and groove throughout the evening.  A consistently balanced mix too!  Things seem to be ever gelling and building for this group right now. Check it out.
Posted by F R E E L A B at 11:20 PM 3 comments: 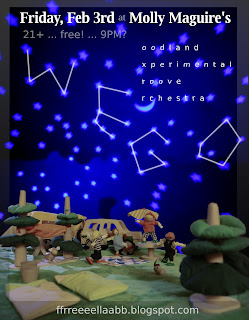 Here are the recordings from WEGO's first ever full-night show at Molly Maguire's on Feb 3rd, 2012. The orchestra for the evening was Woody Frank (guitar and voice), Dennis Jolin (uke and theremin-thingy), Ian McKagan (guitar and voice), Jesse Silvertrees (djembe and voice), Emma Staake (voice), Evan Strauss (bass and voice), and Me Woods (glock, trumpet, charango, percussion and voice). Wow, that's a big orchestra for a stage that is perhaps optimal for two acoustic musicians! Did I forget anyone?

There are lots of high-points here (especially whatever the hell Evan was singing near the end of Set 1 … and my weirdly macho rendition of 'Single Ladies' in Set 2 ... and both of Emma's lyrical-standards from the end of Set2 -- 'Kiss the Girl' and 'A Man Needs a Maid'). But the entirety of Set 1 is perhaps a great template for the best of WEGO. It's just a little on the edge, but still chock full of groove, spontaneous truly-musical interplay, and vocal synergy that builds well beyond the basic lyrical content.

Molly's was packed pretty tight when we started, and I was continually surprised to look out from time to time and see that an overwhelming majority of the crowd was actually watching and listening intently. With our improvisational format, WEGO usually thrives in this type of a environment, looping positive feedback on the attention of the room. Frequently, laughter erupted. Later in the evening, the "power of the beer" may have become too strong to resist, and I fear we lost some of our dynamic range -- stabilizing into a loud, somewhat-messy din. It seemed that we lost some of our audience at this point too, though perhaps it was just getting late. Regardless, in light of the many high-points, I'm declaring this show a huge success. Hopefully the staff of Molly Maguire's concurs and we'll be back again very soon!

(I don't think I've ever seen so many people taking photos and videotaping us as during this show, but at the moment, I've got nothing to add to this post. Is anybody acquainted with any of the evening's paparazzi?)
Posted by F R E E L A B at 10:38 PM No comments: