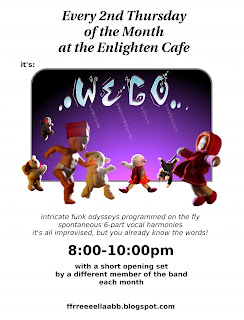 Here are the recordings from the first in our ongoing run of shows (2nd Thursday of every month!) at the Enlighten Cafe! Woody played a fantastic opening set to kick things off a little before 8pm, and then WEGO played what was essentially a single hour and a quarter set, with a brief on-stage break to add a few new chord-changes to the boards. I'm going to try to hold off and leave some space for people to call out the highlights in the comments below, but I personally reeeeeally enjoyed this night. :)) It felt like the recent adjustments we've made are really opening things up beautifully.  And the additional percussion (see lineup notes below) magically agitates the itch to dance … at least in my head when I listen back … no actual upright dancers this time, but it feels like we'll be supporting them well next time they step up.

So yeah, whether you were there at the time or are downloading from afar, I invite you to give us a glimpse of your view in the comments below!

I know I say this a lot, but from my perspective, this was another big breakthrough rehearsal! We made couple of specific focus changes here, with the aim of increasing groove and the idiosyncracy of our interpretations of the Lyrical Standards. I'm going to try an experiment and not bore you with the details for a change, but suffice it to say that it seemed like a success to me. With the new foci, you'll see it takes us perhaps a bit longer than usual to warm up into full vocal interplay, but the grooves are indeed deeper and more open and it's a bit of an understatement to say that the vocal stylings were idiocyncratic!

The orchestra for the evening was Woody Frank (guitar and voice), Jenny Freeling (back on djembe!), Ian McKagen (guitar and voice), Jesse Silvertrees (keys, some djemb, and voice), and Me Woods (bassbox and voice). We spent quite a while setting up in a more realistic stage-configuration and discussing the focus changes we wanted to make, but still managed to fit in a short set and an even shorter set. The second set started as more of a "let's do one more little experiment" sorta thing and maintained that vibe throughout, so I edited some of the noodling and banter out here in order to bring you the bizarrely inspired remnants.

For me, in addition to the increased sparseness and funkitude, the high points of the evening both came from the voice of Ian McKagen, who closed Set 1 with a deeply disturbing mellow-death-metal version of 'Rainbow Connection' and jumped up early in Set 2 with a ween-esque country rendition of "Crazy Train". Oh man, also I'm just remembering, Woody set up a soooper soulful version of Electric Avenue mid way through the first set. … so sweet. 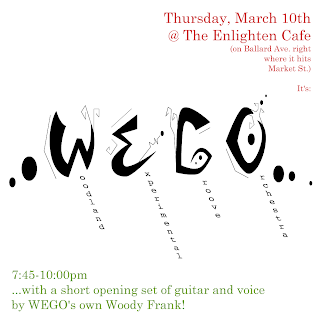 Call out your own high(or low)lights here in the comments, and please join us for the very first in an ongoing series of monthly shows -- 2nd Thursdays!! -- at the Enlighten Cafe in Ballard, this Thursday, March 10th!
Posted by F R E E L A B at 10:11 PM No comments: