Not only was Tuesday, January 26th (2010) the last 'Woodland Acoustic Orchestra' show (a tradition that I was surprised to look back and discover started all the way back in February of 2007 with the original 4-piece lineup of Philpin, Smith, Strauss, and Woods and "Neon Brown Beats the Rainbows out of Kittens"), but it was also the last 'Neon Brown Presents:' show, (a tradition that's been running twice a month since summer solstice of 2002 ... but more on that in my NBP wrap-up post.)

Befitting just such a momentous finale, we had a huuuuge orchestra, including long-time collaborators TQ Berg (guitar and voice), William Precht (accordion, bass-box-drum, and others), Dave Foley (stick-tambourine) Dennis Jolin (ukelele and voice), Ian McKagen (guitar and voice), Jesse Silvertrees (djembe and voice), Daniel Nelon (voice), Bill Wolford (banjo and iPod), and Me Woods (bass-box, trumpet, percussion, voice), *plus* first-timers Elliot Levin (guitar) and "this guy", whose name I never did learn. Anybody? ...not to mention the spirit of John Foss on 'super-barista'!!! 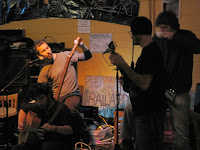 After a fantastic 6-8pm DJ set by Skoi and a speedy setup, we kicked it off with a "3, 2, 1 Lunch" (what Tina and I say before hoisting Lucy up over our heads) and rolled our bittersweet way to 10pm with a steady cascade of grooves -- shifted periodically by our traditional white-board-based signaling system -- and lyrics -- improvised on the spot either from the evening's theme or some other half-conscious brain-tickle brought to the fore and decorated. 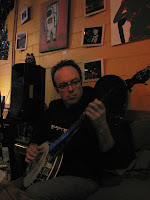 With the late start and the momentum provided by the strong collective vibe, it was really just a single set, with only a brief stall at 9:20-ish as we unplugged Elliot and Bill and added William. But I might break it up there, depending on how it feels on a second listen. (Aw screw it! I'm leaving it all there for posterity. There's a bit of entertaining banter there and the rest is a pretty nice sound-collage-intermission.) 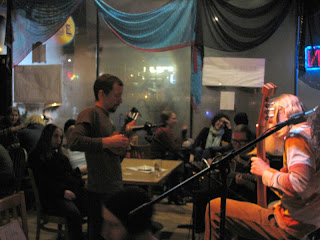 All in all, it was a great glowing musical celebration and a fitting farewell to the series at Mr. Spot's Chai House. (Thanks to Robert and Tina for the photos!) 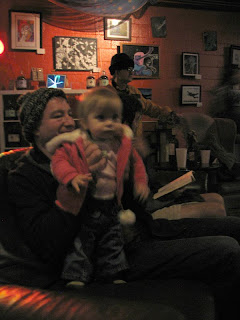 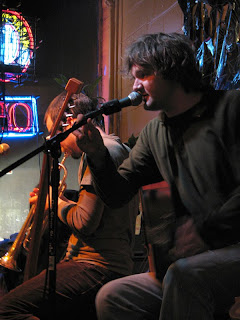 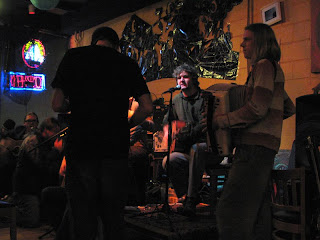 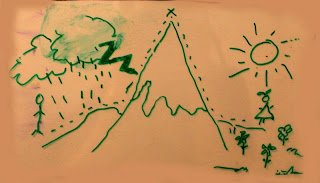 Here's a Juggler's Challenge Revival show that is noteworthy in so many ways! Just looking at a couple of "set-and-setting" factors, it was the first show on our new Tuesday slot, but then -- with the sudden news of the closure of the Chai House at the end of January -- unexpectedly also became our last JCR show! (...for quite some time, at least) I'll try to talk more about some of the significance of that in February, but for now lets return to the specifics of Episode 25: 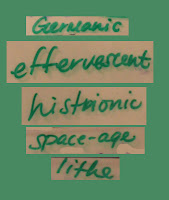 The band for the evening was a tight quartet of TQ Berg (guitar), Dennis Jolin (guitar), Jesse Silvertrees (djembe, voice, and piano), and Me Woods (keyboard and voice). Challengers included a few Chai House regulars and several old friends who had come out to help celebrate the last JCR for a while.

Set 1 warmed up with a deep, melancholy prelude of Def Leppard style guitar-arpeggiations. TQ picked up a variant of Dennis' line so quickly here that I didn't know who had started first and was convinced it must have been a riff that TQ had been playing with at home (Dennis is playing it first on the recording at least, but who knows what happened before I started up the Edirol...?). Then at the beginning of set 2 -- where TQ *did* start off with a riff from one of his old compositions (omitted here in the recording) -- Dennis somehow telepathically hooks up and spontaneously weaves a spot-on 2nd guitar part. Especially in the second case, I was certain they must've been rehearsing these bits, but apparently not! 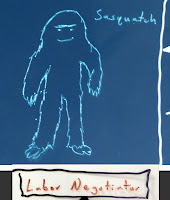 Finished challenge-sheets started appearing near the projector during the prelude, starting with a "musical experience in 10 words or less" and continuing through fresh new versions of just about all of the current challenge styles. Highlights appear throughout the evening, but some of my favorite 'juggles' of the night happen towards the end of Set 1, including one of my favorite Abstract Graphical Scores (built entirely of recognizable forms while nonetheless retaining strong abstract (gestural) properties), another highly exploratory and rousing version of "5 Adjectives", and a particularly ridiculous version of "The Key" to close the set.

Set 2 had some fun moments as well, jumping right in with a truncated story about Sasquatch the Labor Negotiator and continuing boozily through to the closing "Style Blender". 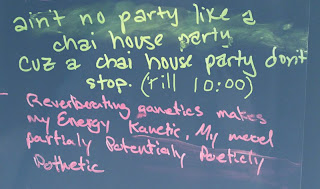 So that's about it for this one for me. While we're quickly coming to the end of the NBP (at Mr. Spot's Chai House) recordings, I wouldn't worry about this blog drying up any time soon. I doubt that even this sad situation is going to be able to kick this 'walking-with-spontaneous-music-and-worshipping-the-footprints' monkey off my back. But man, it's gonna be tough both to leave this fantastic ongoing gig at the Chai House behind and to try to decipher some of its significance for me. Luckily there's still one left so I can put that off for now! :) So, if you're reading this before Tuesday, January 26th, 2010, there's still time to come out and celebrate one last time with us as the 'Woodland Acoustic Orchestra'. As always, please add your own liner-notes here in the comments and I hope to see you again soon!
Posted by F R E E L A B at 3:46 PM 4 comments: