Here are the recordings from our November 10th show at the Enlighten Cafe. The orchestra for the evening consisted of Woody Frank (guitar and voice), Jenny Freeling (djembe), Sarah Gardener (sp? … first time out on banjo!), Dennis Jolin (uke and percussion), Ian McKagan (guitar and voice), Jesse Silvertrees (keys and voice), and Me Woods (bassbox and voice). Wow, that's a good-sized orchestra! Did I forget anybody? Oh yeah, Emma joined us again briefly during the second set too.

We transitioned pretty seamlessly from a chaotic last-minute setup straight into one of our best first sets ever. Woody was directly next to the board for this one, and seemed to be adjusting the mix throughout the evening, with indescribably beneficial results! Even with the extra-jumbo lineup, the mix felt balanced and well-supported throughout, and the playing responded in kind. Jesse and Woody had called out for some new lyrics, and so the three of us had each brought in a couple of new sheets to spring on the group. While I still value the possibilities that collective familiarity with a particular 'lyrical standard' can bring, the influx of fresh structures really seemed to launch us into a happy and synergistic place. With all of the recent shows, it seems we were ready for them, in a number of ways!

I also noticed two subtle changes that seemed to open things up: One was the increase in complicated and jazzy changes (lots of major 7ths and 9's), which just felt so rich with the easy momentum of the big group. And the other difference was signaling more of the changes to cycle at about half the rate that we usually cycle them (each chord held for two or more measures, instead of a quick 4-count).

This was a fairly inspired evening for me personally, on both bass and vocals (see "Whip It" or the first-set-closing "We Will Rock You", for example). I felt like we were all a bit spent after Set 1's climax -- certainly I was! -- and so the second set may have tapered off a little in cohesion, if not energy.  …though I haven't had a chance to listen through yet.  But all in all, this was right up there with our very best shows and another good omen of things to come!
Posted by F R E E L A B at 3:08 PM No comments: 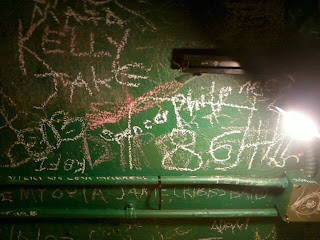 Here are the recordings from our Nov 5th opening slot for David Montgomery and Lark vs Owl at Molly Maguire's. The stripped-down orchestra for the evening included Jenny Freeling (djembe), Dennis Jolin (ukelele and assorted percussion), Jesse Silvertrees (keys and vocals), and Me Woods (bassbox and vocals). 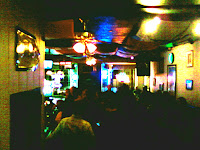 This was my first time playing at Molly Maguire's -- though I think I may have seen a semi-acoustic show in the back room there towards the end of the '90s, back when it probably had a different name. I'd loooooove to play this place again! There was a huge, diverse, energetic, seemingly-walk-in crowd -- the sort of energy I haven't seen since the old Dubliner Pub at the bottom of Fremont hill. The stage is a bit tiny for our usual lineup (and even for the the 4-piece we had in effect on this particular evening), but we could get creative, right? Even the pesky intermittency of the PA turned out to be the result of my own defective 1/4 inch cord. 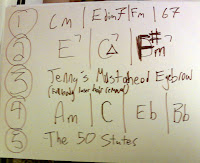 So yeah, this was a fun evening! We were certainly missing Woody and Ian from the core line-up (looking forward to this Thursday at the Enlighten!), but even the early parts, which felt almost painfully tentative at the time, have a solid mix and a nice rubbery bounce to them.
Posted by F R E E L A B at 11:58 AM 2 comments: