Here is a short bit of informal jamming by the WEGO lineup! Sadly, we learned this week that the Enlighten Cafe will be closing over the next few days. Woody had set up a last minute party and by the time I arrived at 8:10-ish, a low key gathering had convened, with Dennis, Jesse, and Ian improvising some mellow grooves to flavor the space. I unpacked some percussion and my trumpet and Woody raced out from behind the counter with his guitar, and for about 40 minutes it was practically a WEGO show … minus the chord-changes and the pop-lyrics. It was really nice to play with these guys in a more open modal-format! It makes me think we should try to spend a slightly larger percentage of our time in pure modal exploration in the future... We did signal a few nice modal shifts and Ian and I provided some lyrical focus here and there. And then it was over.

Later, Woody played a short solo set, and Ian played a few tunes with Jesse accompanying him on the djembe. I assume other players joined in later in the evening, but by then I had returned home with Tina and Lucy to settle in for the evening. As usual, I don't think much of the weight of the venue's passing hit me at the time. Too many interesting interactions to focus on! But it was great to see some of the cherished regulars and bask in the warm and slightly melancholy mood.
Posted by F R E E L A B at 7:58 PM No comments: 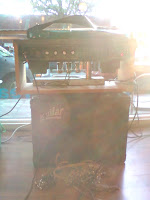 Here are the recordings from WEGO's first Friday show at the Enlighten Cafe on August 3rd, 2012. The "orchestra" for the evening consisted of Woody Frank (telecaster and voice), Ian McKagan (stratocaster and voice), and Me Woods (bass and voice).

Despite the extree-small orchestra and the lack of percussion, this show had plenty of great moments and sported an unusual warm, crunchy ambience throughout. Revel in the stripped down majesty!
Posted by F R E E L A B at 11:10 AM No comments: