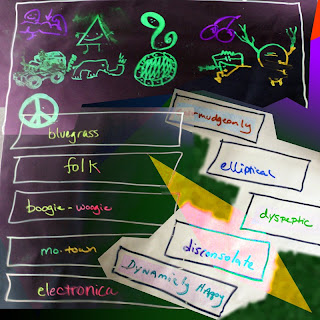 Here's another typically atypical and -- for me at least -- highly entertaining Juggler's Challenge Revival show. Jugglers for the evening were TQ Berg (guitar and voice), Dennis Jolin (percussion and voice), Ian McKagen (bass for 1st set, guitar for 2nd), Michael Perry (drum-kit), and Me Woods (trumpet and voice for 1st set, bass and voice for 2nd).  The JCR idea-engine whizzed smoothly along in 21st gear for the whole evening here, with the return of some veteran Challengers from the early shows providing so many colorful and odd-shaped "balls" that by the end of the second set, we'd Juggled barely over half of them.  For me, the highlight was perhaps the 1st Abstract Graphical Score (starting at about the 40 minute mark in Set 1), which landed on the overhead projector with 3 perfectly open-ended linked-symbols/drawings. We'd just worked through the dangling necklace of notes and the slice-of-bread with the giant keyhole in the center, and I had just begun wondering what to put on the other side of the door when Krista (sp?) added the sparkly octopus. For me, that's what Juggler's Challenge is all about! 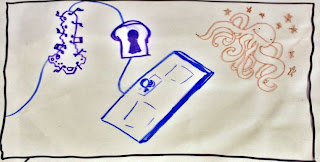 The first set began right as Ian (who had graciously showed up to fill-in on bass at the last minute) finished setting up his rig and then abruptly and mysteriously booked out the door, saying that he'd be back in a couple of minutes. In the absence of bass, the first few minutes featured some beautiful open space and then an "interlude" of some of the most vicious feedback we've gotten in years (the biggest peak is actually clipped out of the recording here to spare your ears :).  Unfortunately, since TQ was set up near the PA I think we mistakenly focused on the wrong mics in fixing the problem (his and Ian's), when I'm pretty sure now that it was the mic that we had set up for Michael's harmonicas, but which by then had been passed over to Dennis who was much closer to the speakers. Oh you bitter whiner, blasted "hind-sight"!! In any case, within another minute or two, Ian was back and we were off and running again on our first module. From there, it was a supremely beautiful evening, marred only slightly by one guy's repeated requests for "Takin' Care of Business".
On the recording front, I think the return to the split-mic really helps spread the mix and bring the vocals forward a bit (the left mic was strategically placed quite close to one of the PA speakers).  But apparently the excitement of the set-break erased any memory of the recording gear from my mind and I didn't remember to restart it again until probably over half-way through the second set, missing a stellar warm-funk warmup, a bluegrass-folk-boogiewoogie-motown-electronica version of the innuendo-fueled mad-lib song, and a story of Frodo the Hampster Farmer and Jinxmooh the Assistant Demigod. 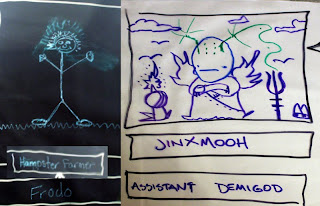 One detail I wanted to call out: I *think* most of the other Jugglers understood at the time, but since I've been known to advocate for lower volumes in the past, I wanted to clarify that the bit that starts just before 8 minutes into what remains of the second set was pure theater. ...not an artsy way to try to get people to turn down! This was the 2nd graphical score of the evening, and I was pretending to be an elephant getting paranoid that the cops would bust him for smoking pot with his fellow pachydudes in the storm-sewers. I swear it was right there plain as day in the score! ;)

Okay, that does it for me for this one. Anything else that I might've called out? ...please add it in the comments here.
Posted by F R E E L A B at 7:49 PM 3 comments: