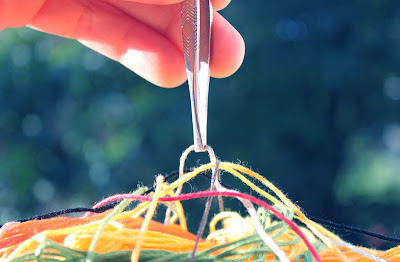 As we were playing, I think many of us were oscillating back and forth between complete absorption in navigating the gentle musical chaos and thinking "wow, this sure has been chaotic for a while now!".   As such, in spite of the glowing reviews from several listeners, I wasn't sure whether it was as strong as our average show, but now that I've heard the recordings I'm a complete convert. Rhythms, melodies, lyrics rise and fall amidst a loosely-organized, constantly collapsing and overturning musical babble. Each thread seems to emerge, gently pull on some neighboring tangles and then unwind back into the mass of soft colourful yarn. The maturity and active ears of each musician are on full-display as they patiently respond to each other without forcing any particular groove or motif to the forefront. The general patience with inconsistency allows layers and layers of overlapping and loosely-connected patterns to build and shift against each other. This is advanced listening to be sure, but not so easily dismissed as wankery in my opinion.  In the second set, things became more conventionally stable but still great.

So, I think I'll leave it at that for this one. As always, I encourage you to add your own thoughts below in the comments section. Oh, and one more thing: Many of the "signals" written up on the white-board by the various band members were unusually conceptual and even pleasantly risky...just so you don't give me too much of the credit (or blame ;) for the somewhat questionable lyrics!
Posted by F R E E L A B at 9:19 PM No comments: 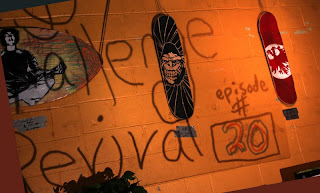 The 2nd Wednesday of August was another in what feels like a steadily-building series of Juggler's Challenge Revival shows: Episode 20! Jugglers included Woody Frank (Electric Guitar), Dennis Jolin (Percussion Spread), Donovan Raymond (Bass), Paul Turner (Drums), Adrian Woods (Loops, Chimes, Vocals, Percussion, "Crust-Wave"), and Me Woods (Vocals and Trumpet).The audience-interactive portion of the show went better than ever, with the seasoned band making grand use of input-sheets that seemed to pile up on stage before we were even plugged in. A heaping of heartfelt thanks to everyone who added their words, ideas, and drawings! It was a model JCR show. (Also, for posterity, this was the debut of the "5-Adjectives" sheet.) 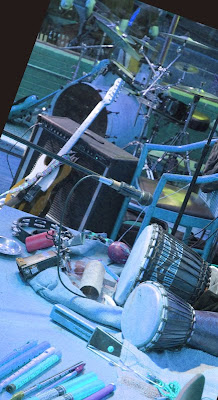 This was Woody's last show of the Summer before he heads back to CA for the school-year. We had thought we were going to have TQ on guitar again this week as well, so Dennis was 'all-percussion' instead of his usual strings/percussion mix. As it turned out, instead of our usual 3-or-4 treble-guitars, it was just Woody. But let me tell you, if anybody can play with enough energy and versatility to make up for 2 extra guitarists, it's Woody! And indeed he did. With his single guitar playing a key role in outlining a wide range of diverse styles and syncopations for each movement, it was an inspired and fitting end to our all-too-brief Summer run with him. We'll definitely be looking forward to seeing Woody again whenever he's back in town next!
Dennis had decided to (for the evening) trade in his strings for an impressive spread of hand-percussion that just about filled the entire abandoned drum-riser. It seemed that no one -- except possibly Dennis himself -- was hearing enough of him at the time, but on the recording his supremely tasteful grooves and pinpoint-targeted soundscape additions come through pretty clearly and really bring some tang to the sauce.

I'd been eager for my next chance to play with Paul, but had been waiting for a non-chai-house show, in light of our common Juggler's Challenge difficulty with volume-balance and Paul being one of the hardest-hitting drummers in the city. But in running into him at the previous show, it was suddenly clear that we needed to try it. Mercifully, he brought a range of lighter drum-whackers, allowing his precise, intricate, dynamic-driving magic to transform the JCR format. I now greatly look forward to rotating him into the band more regularly! 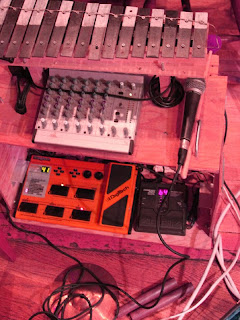 It was fantastic to have Adrian back again as well, soundscaping just below the threshold of perception with mostly just house-mic input and hacked fx-loops as only he can! (I even caught him playing percussion on the table-legs towards the end of the night. :)

I played Trumpet again! ...and it was much less embarrassing this time. I think I'll do it some more.

At this point, I think I should mention that it's hard to imagine even pulling these shows off these days without Donovan on the bass. I guess -- since the format tends to shift happily to accommodate whoever's there -- we'd manage, but Donovan brings it all: rock-solid, bone-shifting grooves (across a diverse range of feels!) that never fail to either trigger or seamlessly integrate a new thread or concept. Somehow he manages to "fill" us towards a new chord or through a turnaround at just the perfect point in the lyrical structure every time. It often feels like he's already memorized the chart for the song that we're supposedly making up on the spot, but I suspect he's just a really good listener.

Okay, that's it for me on this one. Please add your own thoughts and observations here in the comments!
Posted by F R E E L A B at 8:57 PM 3 comments: