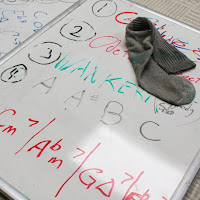 It's not so much that this features the best versions of several of the regular lyrical standards or any particularly zany energetic peaks (though it has plenty of great examples of each), but this was the rehearsal where I feel like we may have finally grokked a particular mix problem that would occasionally spring up with frustrating results. And I think we've hit upon a simple fix that should be able to consistently prevent it!

Since I went on about it so much last week -- and since I know you all come here first and foremost for in-depth mix-analysis ;)) -- I'll go into a bit more detail. I'll call this problem the "Unintentional Volume War". That is, it takes place in a group of competent listeners who aren't idealistically committed to ear-splitting volumes for their own sake (and is above and beyond the general tendency for people to want the music louder as their ears warm up). In this case, it's obvious that nobody is *trying* to bury the other players, and yet each player's volume keeps rising until it reaches the point that the old-folks in the room (me) stop turning up and start begging for everybody to turn down.

The solution might sound obvious, but I seem to keep forgetting it in spite of the fact that I know I've fixed this same problem in previous bands with similar solution, so it seems like it's worth laying out fully here. Most portable guitar-cabinets (and my keyboard-speaker) are low to the ground. Each player tends to set up so that they're standing directly in front of their own instrument speaker so they can adjust amp-settings, etc… These types of speakers throw a pretty narrow cone of sound. It's not like you won't hear it from off-angle, but it's about 4 times as loud if you're directly in front of the speaker. So, hopefully by now you can picture the problem: Since most players' heads are several feet above the ground, each player's sound is louder to everybody else in the room than it is to them, unless they're born with the exceedingly rare extra pair of ears in their calf-muscles. It's quite common for a player's sound to seem obnoxiously loud to everyone else in the group but still feel like they can't hear themselves well enough. So they turn up even more! The solution is to make sure that each player's amp is louder to that player than it is to everybody else in the room -- to treat the amps more like stage-monitors. In a small space, this usually means tipping the amps up at a 45-degree angle so that they're aimed closer to the head. I've blathered on long enough about this, and I'm sure you can all work out the implications, but suffice it to say that this simple change makes a huge difference.
Anyway, as I ramp up on other bus-projects again, I've got less time for cutting these recordings down, so you're getting another behind-the-scenes view here. Perhaps partially as a result of the new sonic and cognitive spaciousness, we were able to pull off some pretty adventurous uses (and hybrid usages) of the signaling language. A number of times, you'll hear us discussing the implications of what we're trying on the fly. And sadly, the best of the "sock"-themed freestyling happened before I started recording, so apologies for what is left here! ;))
Posted by F R E E L A B at 9:40 PM No comments: 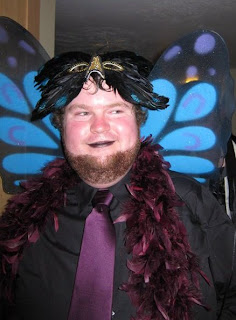 Here are the recordings of the Woodland Experimental Groove Orchestra at my fine friend Rusty's Halloween party. Rusty always throws a great party -- mingling groups of friends from diverse parts of his historical and current life -- and this was no exception! Rusty and his roommates Kim, Kyle, and John boldly opened their space at 8pm, and the costumed crowd of (I'm guessing) about a hundred people came and went until well into the morning of Halloween. Meanwhile, WEGO set up in the upstairs living room and played two roughly-hour-plus sets between 9pm and midnight. The Orchestra for the evening consisted of Woody Frank (guitar and voice), Jenny Freeling (occasional djembe during the second set I think), Dennis Jolin (uke, mandolin, and timbales), Ian McKagen (guitar and voice), Jesse Silvertrees (djembe and voice), and Me Woods (keys, misc, and voice).

This was a huge loose sprawling show with some high points and plenty of rough patches. I'm tempted to try to condense these recordings down to the most appealing sections, but I'm pretty busy on my commutes at the moment, and I'm afraid that the sonic quality of the mix (balance, clipping, etc…) just doesn't warrant the effort.

There were a couple of key problems that -- at least in my mind -- made it tough for this show to ever get off the ground musically (if this is your first visit here, or your first listen to WEGO, I'd recommend skipping down to one of the previous show-entries). First, the mix was way out of balance where I was. I can't speak for what anybody else heard that night, but where I was it sounded about like it does on the recording, but ear-splittingly loud. (Actually, the recording is also improved a bit with some EQ and compression, but you get the idea.) I tried a slightly different approach to the keyboard-amplification for this show, running it direct through the board to the stereo vocal-spearkers and using my bass amp as an extra low-frequency amplifier for the whole PA. However, even with a PA speaker aimed directly at me, I couldn't hear the treble (right hand) half of my keyboard unless almost everyone else had stopped playing. Furthermore, since I was the only one with the vocal mic, we chose an uncomfortable split between a range that would keep up with the guitar and timbales and one where the open-air vocalists could be heard a bit. The result was a treble-heavy din, leveled just under mandatory ear-plug volume, requiring any vocals besides my own to be shouted at the top of one's lungs (some impressive use of this style in places here, but of course, you only get so much range with this approach). Jesse didn't show up until about a half hour after we started and I forgot to put on my leg-shakers until only a few minutes before that, so of course it was difficult to resist over-playing to fill in the rhythm. For whatever reason (maybe to draw attention away from the mix…?) we also sang a bit more than usual and so we had to start repeating Lyrical Standards. Though really, is there a limit to the number of ways that you can sing the theme from Cheers? I think not. Still, we'll probably still want to get a few more in the hopper for longer shows like this.

In spite of all of that and within the confines of what was possible, the playing is really solid from everyone. There are some cool sections in the middle of the second set where we really surrender to the limitations and it breaks down into a full-blown percussion-jam. And near the end of the night, there's a weirdly fun section where a guy wearing a really long fake-beard (I assume it was fake! … or perhaps he's of muppet descent) got ahold of one of the mics and started gently and musically exhorting the crowd to take off their pants and "put some honey on". Another nice thing: the police didn't show up until right *after* we'd finished playing.

So, overall: not really up to the potential for warm dynamic multilayered groove that the group usually manifests, but perhaps a bit like a best-case drunken party jam. And at several points during the night, a thin line of costumed freaks materialized in the narrow space between us and the couch, grinning and dancing hypnotically to the lurching grooves … mission accomplished!! :))

Special thanks to Rusty, Kim, Kyle, and John for puttin' this thing on! (Feel free to share your own memories here below in the comments.)
Posted by F R E E L A B at 1:41 PM 2 comments: