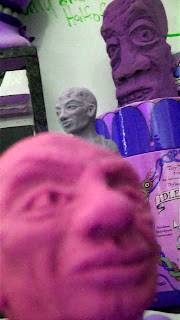 Here are the recordings from WEGO's May show at the Enlighten Cafe! Ian McKagen played a sweet, extended-and-completely-unamplified guitar-and-voice set to kick things off, followed by about an hour of the Woodland Experimental Groove Orchestra. Orchestra-members for the evening included Woody Frank (guitar and voice), Jenny Freeling (djembe), Dennis Jolin (various and sundry), Ian McKagen (guitar and voice), Jesse Silvertrees (djembe and voice), and Me Woods (bass-box and voice).

Some great collective harmony and momentum here, and also plenty of typically-surprising spontaneous departures. Highlights for me included the debut of 2 brand new lyrical standards ('Poker Face' and 'Workin for the Weekend'), a solid round of "Boom Chaca-Laca", and another strong final gag -- rewinding the clock from 10:01 back to 10pm. Ian led one of our most ecstatic versions of the Beyonce tune to date. And Dennis brought out a tiny battery-powered amp that hung off the bottom of his guitar and uke. With combinations of that and some of his more portable percussion, he then "took it on the road", extending the groove to various parts of the house with his own roving "surround speaker".

Sadly, I'm noticing that the bass-box is having a hard time keeping up. (Was it that buried in the house?  It didn't *seem* that buried at the time, but maybe it's because I was sitting directly on it ... or the recorder was in some sort of low end frequency-cancellation hole…?) I know that when we're quiet enough to hear the hand-drums well, I can get plenty of low-end (100-hz) push, but even with the new EQ, it just doesn't have enough 600-hz growl to bring the funk. :( I'm gonna try a couple of things, but I'm considering a switch to electric … or maybe I'll try out the key-bass again.  That could be cool.  We'll see. Regardless, just having the vocals up to a decent level seems to keep it entertaining!
Posted by F R E E L A B at 4:00 PM 5 comments: