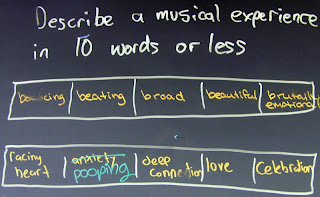 For those of you who are interested in numbers but not good at counting, that's 7(!) people at a fully-improvised event where (1) interpreting audience-input in a relatively focused and accessible way and (2) keeping the instrument volumes in balance with the vocals are both of fairly-high importance. And really, on both of those counts this was possibly the best group yet! Apparently, if the players are actively listening (something I know I can count on from all of these guys), 7 people is actually a number of people for something like this -- allowing each person to play more sparsely and have plenty of leftover attention to explore and amplify whatever conceptual challenges the audience has thrown our way. 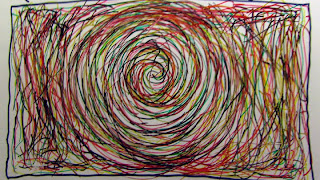 Throughout the evening, grooves, melodies, and counter-melodies morphed and intertwined seamlessly with nary a hint of devolving into an escalating-volume war. In fact, now that I think about it, we actually had 8(!!) for a while when William Precht briefly plugged in a thumb-piano for perhaps our most nuanced, uplifting, and rhythmically-interesting piece of the evening.
We started a bit late due to a combo of transportation malfunctions and generally poor time-management on my part. Except for Dennis, who was still completing his marathon journey to the Chai House, we were all finally ready to go at around 8:30, when I got a funny feeling about the recording device and decided to check the adapter. 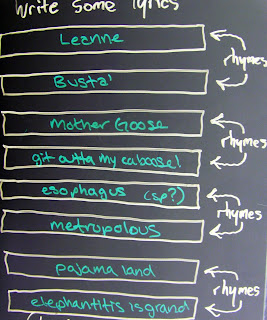 Sure enough, the AC-power adapter was shorting and the screen was already flashing the 'low-battery' message. Sensing that it was likely to be an extra good one, I booked over to the drug store on foot while everybody else started warming up with some instrumental grooves. The recording here starts when I got back about 10 minutes later and stuffed the new batteries in. Since, we had less than 90 minutes from our start-time to Chai-O'Clock, the show became a single unbroken marathon set!
With only a little hounding of the audience on my part, the transparencies began showing up on the overhead-projector early in the evening and became ever-more-inspired, all the way up to the closing verbal input of the night from Erin, "Snails Exploring an Abandoned Salt-Mine".
Here's a rough outline of what went down: 0:00:Warmup-Jams/JC-Introduction/Dennis Arrives/More Jams, 20:30: 'A Musical Experience in 10 Words or Less with Some Cheating', 27:30: 'The "Musical" Love Song', 39:30: 'Todd's Abstract Graphical Swirl-Score', 44:00: Thumb-Piano Jam --> 52:45: "The Key", 59:30: Challenger-Penned Lyrics ("Leanne Rhymes With Busta"), 1:09:00: Sadbot's Grand Cycle, 1:15:30: Snails Visiting A Salt Mine, 1:24:00: Introductions/Sweet Home Mr. Spot's. 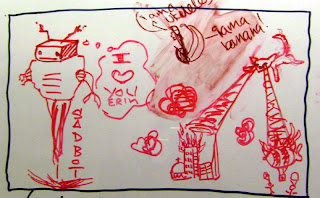 So that's it for this one! It feels like this format is really starting to come together. I'm looking forward to coming up with some new challenge-templates over the next month. I'm also looking forward to seeing where this goes if we can keep at least 75% of the band from show to show and can make the whole concept as accessible for the Challengers as it seemed to be on this particular Wednesday. As always, feel free to add your own notes in the comments here!
Posted by F R E E L A B at 11:00 AM 8 comments:

Set 1 58 megs
Set 2 25 megs
Here's another full evening with the ever-mutating Woodland Acoustic Orchestra. This month's lineup consisted of Noah Adler (Mandolin), Dennis Jolin (Percussion), Aaron Stepp (6-string Bass), and Me Woods (Acoustic Guitar and Voice).  After the minor sound-reinforcement debacle of two weeks previous, I brought my own mini-PA to this show, which allowed us to easily plop the speakers down in some much-more-ideal locations. I suspect the sound from most random places in the audience is usually pretty decent even with the built-in PA, but having greater mixing freedom certainly made it much easier for us to hear each other clearly and -- coupled with some much-more-thoughtful mic-positioning -- definitely yielded a better balance on the recording.

Even still, things took a while to get rolling. Something about the way we started seemed to push us into a corner from which it took a while to figure out how to step away. I'm guessing the general vibe for most of us was something like "man, I feel like I'm already playing too many notes to easily move this somewhere else, but it still feels like we could use some more momentum". To be fair to all of us, the Acoustic Orchestra is a slightly unconventional and ever-shape-shifting beast, and it can often take a while to figure out how to work with (or maybe relax-into) the balance of sonic textures on any given night. Also, we were still a little bit under critical mass for ideal "Acoustic Orchestra" action. Generally it seems that a minimum of 5 players makes it easier for each player to find a nice sparse approach that allows plenty of room for listening, more-effortless mutation, and greater overall momentum...which means signaled-changes can have huge impact without bringing things to a halt.

Nonetheless, for whatever reason (in spite of my many theories, it really *is* a stubbornly mysterious process) things seemed to magically gel about half-way through the first set and -- for me at least -- floated on various incarnations of this inspiration for the remainder of the night. (And really, even the first half of the first set has plenty of interesting ideas.  Just consider jumping ahead a bit if you if you're not enjoying the beginning...it really *does* get quite good!) As with many of the best Acoustic Orchestra shows, multiple simultaneous interlocking melodies form a rich grooving tapestry full of new sparkling details on each listen. 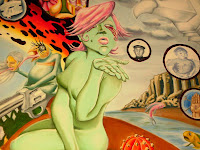 Lyrics, as usual, were mostly lifted and twisted from the Ballard News Tribune, although the end of the first set features what I thought was a rather entertaining extended piece of blather.  This bit was inspired by the very cool surrealist art that had been hanging at the Chai House since at least the previous Juggler's Challenge show (thanks to Dennis for the photos here! 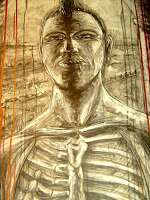 ...if this art is still there next time, I'll try to remember to write down the artist's name and post any relevant links here).
Okay, that's it for me on this one. As always, if you were there or have been sampling the recordings, feel free to add your own comments/context here in the comments section!
Posted by F R E E L A B at 6:41 PM 3 comments: