WAO Presents: "Save The Last Dance For Party Steve"! 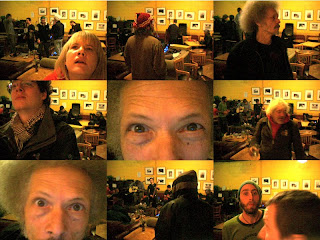 Here's another surprisingly unique Woodland Acoustic Orchestra show, this time with the Chai-House-provided theme of "Save the Last Dance for Party Steve". The orchestra for the evening included John Beezer (rad 80's electric 6-string), TQ Berg (guitar and voice), Dennis Jolin (ukelele and miscellaneous percussion), Jesse Silvertrees (showing up mid-way through set 1 on djembe and voice), Me Woods (bassbox, trumpet, and voice) and a fantastic piano player named Colin (on the house piano) who we hijacked after hearing some of his magical key-noodling while we were setting up.

I'm enjoying the top of the night quite a bit now on the recording, but given the fantastic group we had out, it really did take us a while to get much momentum built up! For at least the first 20 minutes, the music kept drifting to a near-halt before each signaled change. Still, the spaces between signals were beautiful, and it seemed we had built up just the right amount of heat to make a quick switch from slow-boil to steam-fireworks when Jesse arrived with the djembe (at about 28 minutes in). And from there, we were suddenly able to maintain some energy even across the occasional signaled transitions.

You may notice a mysterious guest-vocalist on the recording: a guy that we've seen a few times before who we took to calling "party Steve" by the end of the night. He was playing the part beautifully, but then suddenly disappeared right before the "last dance"! We mostly couldn't hear him singing at the time, but he's clear as a vacuum on the recording since he was usually sitting on the front couches right next to the Edirol (singing "GO! ... GO!", laying down beat-poet versions of "takin' care of business" -- see JCR episode 21 --, and even briefly commandeering Dennis' dumbek -- which we quickly confiscated, since it was still the top of the night and we were barely keeping it together *without* the addition of semi-random finger-drumming. ;) 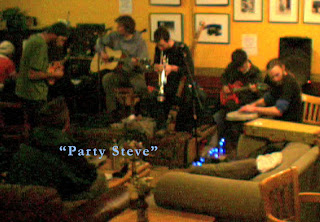 As I mentioned above, things really took off when Jesse showed up. I think Sarah nailed the strongest parts quite well as "heavy tribal" (albeit with diverse stylistic layering and many a harmonized anthemic chorus). All in all, as the energy built through crescendo after crescendo, it was a great cathartic evening and a fitting end to both 2009 and our long run on 2nd and 4th Wednesdays. Starting in 2010, we'll be moving to Tuesdays, where I'm excited to continue to expand the tradition, but where we'll definitely miss seeing our Wednesday-night super-baristas!

So that's about it for me for this one. As always, please call out anything I may have missed here in the 'comments' section and I'll look forward to seeing you all again in '010!
Posted by F R E E L A B at 11:18 AM 4 comments: 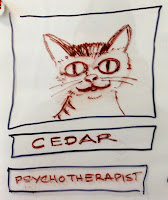 Watch out!! It's Juggler's Challenge Revival Episode #24! Just when you thought we might not do another 3 piece drummer-less JCR ... Bam!! We totally did. It's a good one too. In fact musically, the first set had so many transcendent moments that I just about transcended my fecal-continence! 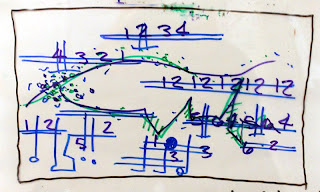 Challenges were slightly sparser than usual this evening, with slightly more room for free-jamming, but the input we did get was absolutely top-notch, including a whole packet (!) of eerily expertly-crafted abstract graphical scores by Chloe. I swear she made the whole set in under 10 minutes and they looked like they were penned by somebody who had just returned from a 6-month retreat studying Cornelious Cardew (though she claims no knowledge of his work or even graphical scores as a compositional form). We only "performed" 2 of them (I add quotes here because these are chock-full of strongly implied structure -- certainly on the difficult end of graphical scores, with plenty of justification for actual study before a successful "performance" could be declared!). I've included those two here (click on the photos for more detail), but I've also captured the rest of this epic packet, which I will be showing off to my fellow graphical-score geeks and possibly bringing back to future JCRs for extensive exploration. ;))

These technically-rich graphical scores shifted the whole discussion into a realm of music-nerd humor where jokes like "Fallopian mode? ... that's like Phrygian, but with a flat-1" seemed funny. 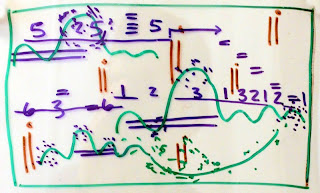 Due to miscellaneous baby-related transportation needs at home, I was traversing the 3 legged commute from home to work to the Chai House without a car on this particular night, and so had packed as much gear as I thought I could fit into my my backpack and a suitcase (the overhead projector, a couple of mics and cords, a couple of strings of bells, and my frog-blocks) to drag through the unusually icy weather from bus to bus on my merry way to audience-interactive glee. I *did* manage to score a generous ride to the Chai House after work with one of my coworkers, allowing me to add my office guitar to the minimal show-rig. Plugging straight into the Chai House PA with only the addition of a fantastic chorus-pedal that TQ brought out for me, I managed to find a simple sound that again raised a joy in the creativity that limited options often inspire. (TQ was also kind enough to bring out his v-bass for me, and I would say I was foolish for not taking the opportunity to play it -- I'd really like to someday! -- but I'm so happy with where the music went that I can't say I'd change anything!)

And, on that note, I think I'll add my usual Rachmaninoff ("dum da da dum") here by asking you all to add any related thoughts you might have to the comments below.
Posted by F R E E L A B at 9:34 PM 4 comments: 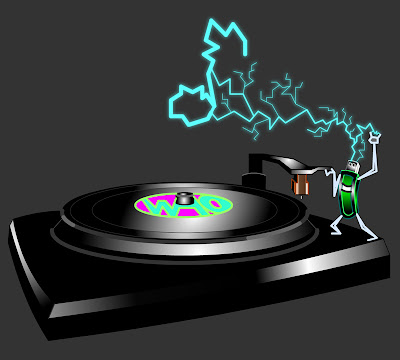 Here's another extremely varied, pleasantly chaotic, and occasionally brilliant Woodland Acoustic Orchestra meeting! Principals in attendance included TQ Berg (vbass and chorus pedal), "Filthy" (fretless bass), Johnny Greene (dumbek and others), Ian McKagen (guitar and voice for the first set, and misc. percussion for the second set), Donovan Raymond (Ian's guitar for the second set), Me Woods (guitar, trumpet, percussion, and voice), and a boy who I'm going to call "Piano Magic" for the time being.

I finally played another short acoustic set here to open up the evening (debuting "Hey Bean", a song I started writing about Lucy when she was a couple of months old), so this was my first WAO appearance with some steel-string playing in months. It was a pretty good set in terms of the musical performance, but I always feel that if I don't play in that format pretty regularly, I'm so confused about where to put my eyes while I'm playing and what to say between songs that the whole vibe goes in a direction that doesn't help people to enjoy the tunes...not "uncomfortable" so much...just maybe overly introspective...? I'm gonna try to keep doing a short set every 4th Weds for a while and see if I can improve some there. Anyway, While I always enjoy the way the density of the Orchestra allows me to experiment with some of my weirder instruments, it was nice to have the full-range flexibility of the traditional -- if untraditionally tuned -- 6-string. In other Andrew-centric news, I think this was *by far* my best trumpet playing at one of these yet! I've been pulling it out a couple of times a week at home and listening back here, I'm really noticing some progress. ...definitely encouraged to keep working with it.

This show was extremely fun to play, but I knew the musical coherence was hit and miss, so I wasn't sure how the files would play back. But the way the recording filters down to just the sonic-component of the evening allows an active listener to easily weave a unifying -- if ever-hue-shifting -- thread through the whole night. One of my favorite WAO recordings yet!! (Note: the momentum *does* take several minutes to pick up at the top of the night, so if you find the first bits to be too wandering, just jump ahead a few minutes.)

The Chai House had provided a typically clever theme for the show that I regretfully failed to even look-up until listening back to these just yesterday, when I realized that we hadn't addressed it at all: "Grand Master Flash-Drive".

The kid that often travels along with Filthy's entourage joined in for the whole second set on piano and was *fantastic*! In spite of being introduced to him several times, I can't remember his name now (I blame it on the weird swiss-cheese-brain-high that often accompanies these shows...but I feel like it gets mentioned somewhere in the second set there...send it along if you catch it!), but his playing was sublte, energetic and simultaneously responsive to key and rhythm. The dude has got it!! I hope he joins us again.

There's so much detail and variety in this show here, that to even begin to log the interesting bits seems like an overwhelming task, so I'll just leave it to you to discover (and call out in the comments here!). But I'd just like to note one extra-cool effect in the recording: Ian was a few minutes late returning for the second set, so Donovan -- who usually just joins in for the electric shows -- hopped on his guitar, prompting Ian to settle in on the couch with a few percussion toys, playing ever so tastefully, but only a couple of feet from the recording mics. Since the sharp attack of his playing at that distance was far above the levels of the remaining instruments, but still below the clipping threshold of the recording, my usual post-compression/limiting pass results in some fairly crazy fluttering that I for one find extremely interesting!!
Posted by F R E E L A B at 10:25 PM 5 comments: