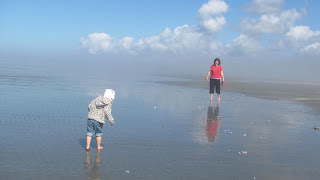 Here are a couple of improvised guitar-and-voice clips from the first night of our recent family-trip to the Washington coast. We arrived at the house-on-the-beach that Tina's family had rented by mid-evening. And by about 9pm or so, we were settled in enough that I was able to escape to the sea-side porch for a few minutes of screwing around on the guitar. You can hear the steady surf in the background, but even with a ridiculously overpowered porch-floodlight aimed straight at the beach, a thick mist completely hid all but the first several yards of grassy dunes from view. However, above my head and stretching a hundred feet out behind the house, this crazy light created a giant conical glow in the fog, within which hundreds of moths flitted about in the night air. Eventually the swarm attracted at least 1 acrobatic species of small bird (swifts…?) who proceeded to unleash a circus of dramatic lurching sweeps through the cone, attempting to pick the insects out of mid-air. 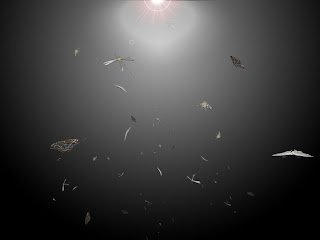 You may notice that this isn't my most inspired lyrical improv, but there are some fun musics here … and the waves and ambient air are just a hair more interesting than uniform white-noise.
Posted by F R E E L A B at 10:12 PM No comments: 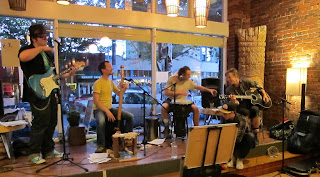 Here are the August recordings from WEGO's regular 2nd-Thursday gig at the Enlighten Cafe! The Orchestra for the evening included Woody Frank (guitar and voice), Ian McKagan (guitar and voice), Jesse Silvertrees (djembe, melodica, and voice) and Me Woods (bassbox and voice). We were also thrilled to have Patrick Lenon (assorted percussion) sitting in with us for the first set.

Even though I was still just about alone at 10-till-eight, by 8:15 the place was packed, and the hastily assembled group kicked right into an extra strong first-set. (I did clip out a short break early in the first set where we stopped to adjust the mix a bit … it turned out I had powered-down the left speaker at the end of sound-check and had forgotten to turn it back on again.) 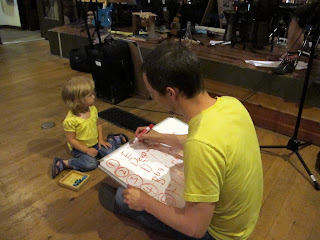 The second set was perhaps a bit less consistent but still featured plenty of high-peaks of cohesion. And I have a suspicion that even the bits where the band may have felt a bit lost had their own peculiar musicality from the other side of the white-boards. In my view, the strongest aspect of our sound this particular evening was clearly the vocal harmonization. WOW, did the dense brassy harmonies all just seem to gel beyond the expected possibilities of improv at times!

(Obligatory bass-box tone-discussion paragraph:) This was my first mic'd show with the round-wound steel strings on the bass-box, and it was a heeee-yuuuuuge improvement. The tone was maybe still a little under-defined, but for once I had volume to spare! By the end of the night, I almost wished I hadn't ordered an electric pickup for it, but I think the pickup will probably give me even more of what I'm looking for. So I'll try to make a removable installation for that sometime before our September show. 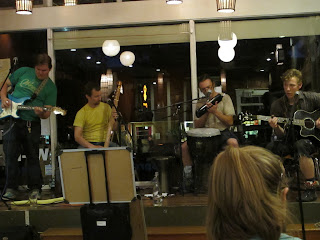 Finally, apologies for the low-bitrate sound of the second set! … somehow in changing the batteries, the input levels got bumped down to the point where I'm needing to both compress and boost around 20db just to get it to roughly match the first set … sadness … though certainly better than losing it entirely. 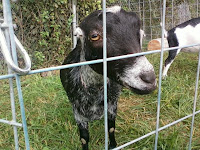 Here is the recording of our all-acoustic trio set from Sustainable NE Seattle's August 6th "Planet Home" event! The micro-orchestra for the day included Woody Frank (guitar and voice), Jesse Silvertrees (djembe and voice) and Me Woods (bass-box and voice).

The weather was just about perfect, shifting from pleasantly overcast to sunny and sweat-inducingly-warm sometime during our set. We played from roughly 1:00-2:00pm on a partially screened little patch of gravel facing a small cluster of tables ringed by strawbale benches. And we had a great crowd at first, as visitors grabbed lunch from the taco stand or free tea from the local tea guy and sat down to watch for a bit. The set starts surprisingly strong for a trio doing what we're trying to do! We maybe fizzled out a little bit sometime after the halfway mark as it got hotter and many of the listeners headed out to the next round of workshops os just to say hi to the goats. (Though multiple people told me it sounded great from other parts of the property as they were milling around.) 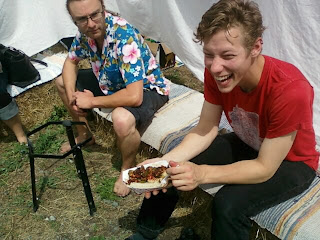 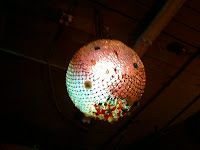 Here's as much as I was able to record of a beautiful all-afternoon jam at Gerry Amandes's's's studio on Sunday, July 31st. The event was timed to take advantage of the simultaneous local materialization of 5-track (LA) and John Beezer (NY, NY), but also drew heavily from a jumbo pool of local Seattle improvisers, including Ian, Woody, and me (all from WEGO). With my atrocious name-recall and the likelihood of forgetting or incriminating somebody, I won't even try to list all of the participants, but it was great to reconnect with those that I hadn't seen in years(!) and to meet a few new and bright faces. (If you were there and don't mind identifying yourself, please sign in in the comments down there at the bottom.)

Special huge thanks to Gerry for offering his studio for this!! It had been several years since I'd been there and I thought perhaps I'd overblown the perfection of the space in my interim memory, but WOW, if anything it was even warmer and more fully appointed than before. I won't get into specifics, but the whole space feels lovingly constructed for freakish sound-support and flexibility of configuration. With an average of 7-10 players at a time, frequently shifting stations, we were never isolated nor crowded. And the whole space just feeeels fantastic.

Music started bubbling up some-time around 3:30-ish(?) and it was still cooking along when Tina and Lucy picked me up at around 7:00pm. So this huge download may only be a fraction of the whole event…? However, this recording does capture just about everything that happened while I was there. The hard-drive on my little recorder ran out of space just as I was packing up to leave. And the breaks between tracks here were simply paranoid attempts to bracket off and preserve recordings. In each case, I started it up again immediately, so not much is lost (… hopefully the breaks make for less of a monolithic download as well).

As with most large-group improv, there's not a whole lot of chordal movement here (with a few dramatic exceptions!).  A sizeable percentage of it was variations on some flavor of modal minor. But the players were all adept enough to extend and imply changes with various dimensions of tension and release.

With how much material there is here, I'm tempted to cull out and present only a few 10-minute clips of the highest peaks of synergy. (… and I may still do that) But I suspect that most of the audience for these recordings will be the players that were there and the people that they send to this page, so for now I'm just posting the whole crazy soup in order to give everyone the best chance of finding the morsels that they remember most fondly.
Posted by F R E E L A B at 11:29 PM 1 comment: