Moments of more traditional grooviness materialize throughout, but overall this was one of our most free-wheeling improv-o-thons yet! After two full sets of sounds and words, I don't think we hit more than 3 or 4 lyrical standards. Instead, lyrical themes tended to build spontaneously from the circumstances of the moment. One of the only proper standards to make an appearance (Ween's "Mister, Would You Please Help My Pony?") wasn't even on anybody's sheet until it happened … though I think I'll probably transcribe it for the next one! Conspicuously absent was Dennis. So we sang about him instead. There was also a 20 minute trio-jam at the top of the evening (Jesse, Evan, and me, before Woody and Ian showed up). It was probably okay, but I really felt like I was floundering on the uke ... and possibly trumpet as well ... too embarrassed to go back and look. So, in the versions I've uploaded here, it's as though the guitars were there from the very beginning.  (I also delivered our first version of "Enter Sandman" during this excised set of movements ... a light jazzy rendition.) 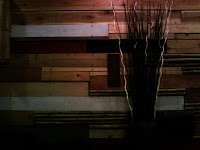 Personally, in spite of continuing to struggle to find the right combinations of instruments to sprinkle into the mix, I had a really good time.  This might not be our most accessible pair of recordings to date, but for those of you who were fans of our early work in the late 60's and find yourself complaining that we've become too "safe" in the new millenium, maybe give this a listen.  Can't wait for Feb 3rd at Molly Maguire's!
Posted by F R E E L A B at 10:59 PM 1 comment: