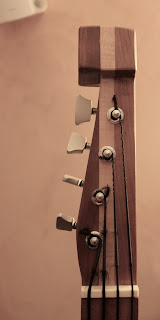 Here's the majority of an October 19th acoustic session with Woody Frank (guitar and voice), Dennis Jolin (mandolin, ukelele, etc…), Ian McKagen (guitar and voice), Jesse Silvertrees (piano, djembe, and voice) and Me Woods (bassbox and voice). (Everybody played some percussion at one point or another too.)

I tuned the bassbox up to EADG (from its usual C#F#BE), which definitely seemed to improve its responsiveness and dynamic range while cutting out some of the clickety string-flopping. While this was all captured open-air direct to stereo, we spent a bit of time trying to place the mics for a good mix and the results are quite nice. Couple that with the increased delicacy of the acoustic format and some extra strong vocal-interaction, and I think this might be one of my favorite WEGO recordings yet!

Use the track titles as a quick guide to the Lyrical Standards covered. The highlight of the evening has to be clip 2's sea-shanty version of Beyonce!  (If anything else stands out for you, call it out below in the comments.)
Posted by F R E E L A B at 9:46 PM No comments:

WEGO: Return to the Gypsy Cafe! 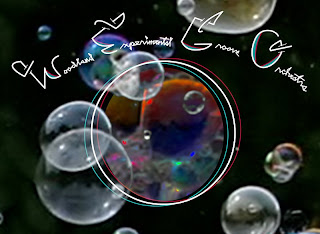 Here are both sets from last Saturday's Woodland Experimental Groove Orchestra show at the Gypsy Cafe, featuring the first public additions of Woody Frank and Ian McKagen (both on guitar and vocals), and the second-set addition of Jenny Freeling on djembe. (Also in the Orchestra for the evening were Dennis Jolin (guitar and keys), Jesse Silvertrees (djembe, keys, and voice), and Me Woods (keyboard-bass, miscellaneous, and voice).

Jesse's stellar homoerotic baths-of-Star-Trek themed invite eventually went out to something like 400 people and set a wild-but-sensual mood for the sizeable crowd that responded. The show opened at around 9:30 with a fantastic 35-minute solo set of piano and voice by Jesse himself (first link above). WEGO went on a little after 10pm, and managed to stuff in two 45-minute sets before midnight.

It may not have been our tightest or "groovinest" show yet, but 4-part cycling vocals and a densely interlocked guitar-heavy sound drove us to new levels of energy and abandon. Chaotic, sprawling versions of everything from Def Leppard to Beyonce collapsed into and returned from psychedelic free-space as the revelers shouted and filled the Gypsy Cafe with bubbles and the crackle of bubble-wrap. I even saw a couple of people dancing! At a coffee house!! Mission accomplished. :))

Oh yeah, one other thing: In addition to his guitar, Dennis set up a keyboard that he'd never brought out before. He had carefully selected some weights to lock down various keys to create adjustable droning chords. At the time, I was in a really noisy spot in the mix, so I didn't notice it consciously, but I'm looking forward to a second listen to see what he ended up doing with the rig!

And finally, whether you were there at the time or are just listening to the downloaded sets at home or on the road, I'd like to invite you to call out your own highlights and/or add any other thoughts in the comments below.

(Bubbles in the image above from a photo I found on Flickr by Glenn Loos-Austin ... and adapted under the terms of a Creative Commons license 2.0 )
Posted by F R E E L A B at 9:45 PM 4 comments: