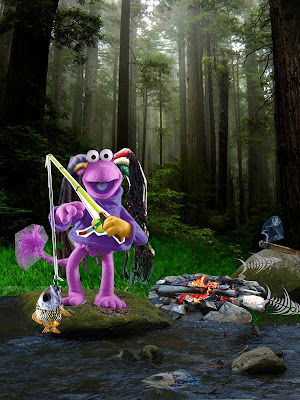 WAO coalesces again here for another successful run with the whiteboard-based signaling approach! (See the post from the end of June below for more details on the format.) This month featured a plentiful orchestra of regulars, including "Filthy" (Fretless Bass) Woody Frank (6-String and Vocals), Dennis Jolin (Ukelele, Percussion, and Vocals), Ian McKagen (6-String and Vocals), and Andrew "me" Woods (Fretless Classical Guitar, Trumpet, Vocals, etc...). We also had a two-piece dumbek section of new-ish arrivals, Johnny Greene (who gave me a CD of a well-recorded, mind-blowingly technical, and thoroughly listenable 20-minute drum-solo!...but more on that later) and Seth "I-don't-know-his-last-name" (the guy seen directing the Abstract Graphical Score in the post below). For the first set we had John only (from the couch in front of the stage), but sometime later in the evening, Seth grabbed my unused dumbek from the stage and joined him on the neighboring couch. Together, the extra percussion extended the grooves out into the house and untold dimensions beyond.

In addition to the continuous stream of expertly signaled direction from within the Orchestra, we also had an unusually fruitful Chai-House-provided theme for the evening (reportedly by Erin...if so, then bravo, Erin! :): "Super Cali Fraggle Rastafarian". As with a handful of the best themes we've had in the past, the story of a ganja-toking Muppet on the road in Northern California shaped the show from first notes to beer-o'clock.

(I only wish the theme had been listed on the Chai House's calendar like it usually is...after the show, I got to talking to a guy who remembered Fraggle Rock better than I did and I realized there was so much untapped potential there! ...so many details that were apparently wiped from my 13-year old pre-rastafarian mind.) But kudos to the group for the nuanced improvisation, the many fantastic -- and often theme-appropriate -- signals, and the stellar muppet-vocals.

I think this might be the first time that the fretless nylon-string has been to the Chai House in at least a couple of years. It seemed to add a nice bit of tonal contrast against the two steel-strings, and the lack of frets forces me to keep things simple, which is great with so many players. It's been much longer since I've seriously picked up the trumpet (...junior year in high-school?), and my impression as I was playing was that I was mostly making a fool out of myself. But listening back to the recordings I really liked the added texture and I don't think it should take me too long to get back to the point where I can find a way to play things that people can enjoy listening to. So perhaps I'll make this combo my WAO rig for a while and see what develops!
Posted by F R E E L A B at 9:54 PM 3 comments: 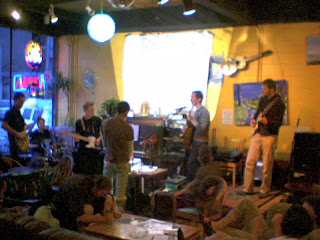 Another 2 fine sets of Juggler's Challenge! July's Jugglers included TQ Berg (Guitar from the last bit of Set 1 on), Woody Frank (Guitar and Voice), Michael Perry (Drums), Donovan Raymond (Bass), and Me Woods (Acoustic Guitar and Voice). It's great to have Woody out during these summer months when he's not away at school. He always brings a pot full of melody, driving rhythm, and unique energy. And this evening in particular I got a number of compliments about his playing. The rest of those guys: Idiots, all! ...I mean genius! sorry, "genius" was what I meant to say. It was a good lineup all 'round. 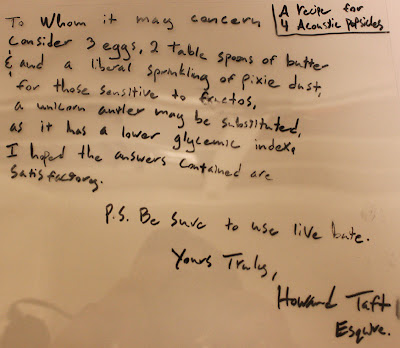 Ian McKagen created the 'Insider's-Surprise' -- the first free-form entry of the evening, played while the bulk of the Challengers are familiarizing themselves with the format and deciding what to put on their first transparencies. He penned a perfectly whimsical riff on the Chai-House-provided theme for the evening: "Acoustick Popsickle" (sic). (If you're new to these shows, see some of the other Juggler's Challenge entries below for more context.) From this point, it seemed that no other explanation was necessary as first-time Challengers immediately grokked the concept and jumped right in with a steady stream of inspired input.
Building a consistent group for this format was clearly paying off this evening, as the Jugglers brought more subtle cohesion and spontaneous momentum out of their diverse experience with vaguely similar forms from previous shows. I had a lot of fun start to finish! The audience was generous and involved and the players were amazing. The fine-print paragraph that follows addresses my only ongoing difficulty with this format. This difficulty is addressed here in the form of a lengthy analysis of the sound-mix and the presentation of part of my grand-unified-theory-of-ideal-live-performance-EQ. Unless such things interest you, feel free to skip ahead.
Sorry to ramble on about the mix every time, but -- especially with this audience-interactive format -- I really do think that getting a good volume balance is near the top of a very short list of logistical/technical keys to getting the format to work. And I keep kicking myself because I never seem to be able to figure out how to fix the problem at the time. As usual, the vocals were slightly more audible at the beginning of the night (and perhaps generally more intelligible than what was captured on the recording), but again they became progressively buried and by the end of the night, I was again singing in a very narrow and loud dynamic range (shouting), just to get the notes -- much less the words -- to cut through. And I think my conclusion after this show is that this problem generally has everything to do with the treble instruments being out of balance. Again, I couldn't figure it out at the time.  This time, TQ was *plenty* quiet. He tipped his amp up at a 45-degree angle on stage and played at an unusually low volume (most likely too low, since we were both up on the tiny stage, and I know he was being careful not to braise my ears...but it was a good experiment and generally I think the tipped-amp approach pushes things in the right direction).  Woody's amp, on the other hand, was in the traditional flat-to-the-ground position, and -- in retrospect -- was probably a few notches too loud. He's a solid listener and could clearly tell something was up, because by the middle of the set, he wanted me to turn up my guitar to match. But by this point, the vocals were both too loud and buried.  One could argue that I should just turn them up, but I could already see the wincing near the PA, and in retrospect I think the vocals were already perfectly situated in relation to the drums and bass. (If I'm going to complain so much after the fact, I definitely need to get better about figuring these things out on the spot.) But this brings me to my general formula for band eq: The bass should be the very loudest...especially with Donovan's all-lows tone. It provides a solid foundation to the frequency pyramid and doesn't interfere with the audibility of the treble instruments, even if they're much quieter than they generally tend to be. (In fact, if you *did* want an audience to embrace a band playing really loud, the best way to do it is to make sure that the low frequencies are the loudest.  We used this approach for half a decade in 'neon brown' and had virtually no volume-complaints, even at tiny coffee-houses that generally eschewed electric music. Conversely, If the bass frequencies aren't keeping up, even a modest volume can feel harsh and overwhelming.) In terms of instruments and VU meters, the vocals and drums should be next loudest.  You should be able to hear the words and the vocalist should be able to sing at lower dynamic ranges from time to time and still be at least audible. Then the treble instruments (guitars, keys, saxophones, chain-saw) should be notched in a bit below those.  You'll still easily be able to hear every note they play (since the bass and drums don't generally interfere with their frequency-range and the vocals are intermittent) and their tones will provide plenty of power and texture without being on top of the mix. Anyway, that's the theory...
Okay, endless theorizing over! I hope none of the fantastic players who have been joining me feel in any way put-off by my theorizing. I certainly blame no-one but myself and my consistently poor planning and communication on this issue. It's obvious that everyone is trying to get a better mix. But since I'm hosting the show, people are probably trying to listen to my suggestions and I'm not giving good ones at the time. 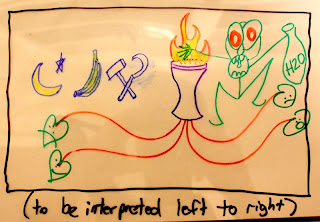 Some of the highlights of the evening included the "Style-Blender" module (consistently working it's chaotic magic these days), the abstract graphical score (written(?) and directed by Seth), the 2-characters-meet module (with input from both the house and the baristas), any of the purely instrumental bits, and -- for sheer shock-value -- my guitar crashing off the side of the stage at the end of the first set. 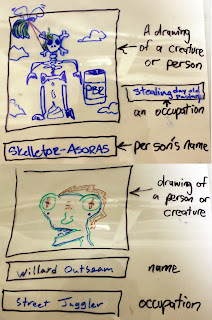 Never fear: though I was vocals-only for the second set, the pickup batteries weren't too hard to get back into their slot on the weekend...once I could loosen the strings and hold the guitar over my head in a little better light.

Did I forget anything? Please feel free to add your own liner-notes (and/or rebuttals to my grand-unified-theory-of-performance-EQ) here in the comments section.
Posted by F R E E L A B at 8:39 PM No comments: